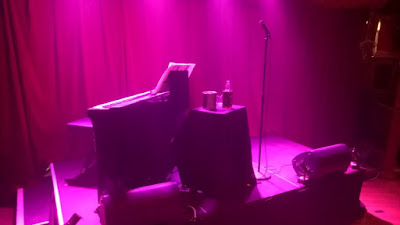 They say that Miles perused each Frank Sinatra record when it was released, especially for his phrasing, so I've been interested in the man and his music. Otherwise, I felt he was a rather unappealing character and the show Sinatra:Raw hasn't really changed my thoughts on that count. But life for a working class man of Italian origin form Hoboken NJ who reaches such stardom is never going to be mild and mannered. Just the name of his mates in performance, the Rat Pack, suggests something of that. But he was an interesting character and a fighter, presumably a function of his upbringing, and a lover, not least of Ava Gardner for whom he left his first wife Nancy (yes, another Nancy Sinatra). He had two more wives. We heard of these stories and they were interesting. The performance was supposedly his final somewhere for friends and others. We heard otherwise of some decency in his politics, of his gloom, perhaps anger, with the arrival of rock and roll, of his comebacks, especially with the film From here to eternity, of his mates, not least the Rat Pack (and how it was named), a touch on alleged clime links and of his break with Capitol records and his creation of Reprise (thus "Chairman of the Board"). But most revealing was his voice, his phrasing, his expression of the tunes. I'd heard of this, but it took a real meaning in some of live event. So we listened after to Dean Martin and Sammy Davis Jr. SDJr was close; DM much simpler and on the beat. Nothing was mentioned on the ruckus around his last Australian visit. It was the subject of an ABC radio story that I heard once while driving to Adelaide. But maybe not even known to this pair from West End London and Edinburgh Fringe. The performers were Richard Shelton as Frank accompanied by Mark Ferguson as FS's pianist, Bill Miller. The playing and singing really was good, convincing, authentic at least to my ear, and the storytelling seemed similarly believable. The attendant quotes from various reviews supported that. So what were the songs? All or nothing at all; I've got you under my skin; It was a very good year; My foolish heart (dedicated to Ava Gardner, as a string of songs were); I need you; Angel eyes; That's life; Summer wind; Strangers in the night; SOme fly with me; My way. One was a cappella and very nicely sung; the last ones were by request; New York New York didn't make the grade, as it was released after this mythical intimate last concert. So a fascinating show. No pics, so this bare stage setting must suffice.

Richard Shelton (vocals, acting) played Frank Sinatra accompanied by Mark Ferguson (piano) as his accompanist Bill Miller in the show Sinatra:Raw in Spiegel Zelt, one of four Spiegeltents at the Adelaide Fringe Festival.
Posted by Eric Pozza at 8:51 am