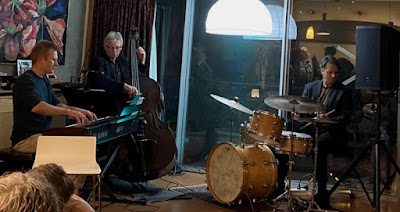 Tilt played a private gig on Saturday night and I imagine it might be my last gig for some months. My orchestras (NCO, Musica da Camera, Maruki) have all closed, indefinitely or temporarily while they assess the situation. That was painful: I was particularly looking forward to revisiting Beethoven 5 and to playing a Bach keyboard concerto with Katherine Day. That's on top of my daytime activities which were also halted suddenly on Friday night. It was just Monday that events of 500 or more (outside) were banned by government and already (I write on Wednesday) we are down to 100 (inside). Things are moving quickly. How soon will the bans on restaurants and bars seen overseas come into play? Music is a just pleasure and pastime for me, but I am pained for those professional players who need the gigs and those in the industry, the sound people and the people who own and serve in the venues. Presumably Llewellyn in shut. I get emails hourly telling me of another event that's cancelled. I read that SSO is doubly hit by moving from the Opera House during restoration and MSO has instituted a Melbourne Digital Concert Hall, like the Berlin Phil's. [BTW, I read that the Berlin Phil is free online for a while with registration]. Not sure there's so much money in it though. We can all retreat inside and write or record or just practice and listen, and that's worthy but again not immediate cash. So it's a difficult time for musicians. And a difficult time for their supporters. Online is good (I've discovered Kate Tempest and watching her concert at Glastonbury on YouTube right now) but it's nothing like being there. Like the talk of online dinner parties where you eat alone at home but chat by video conference. Again, better than nothing, but not the same. So, I may as well suggest you check out my couple of albums and possibly more coming from ePea Studio (including my unrefined solo effort as The Pots) and there are tons of Canberra jazz and other recordings on Youtube and Bandcamp and elsewhere. At least we can keep some positivity in relation to Coronavirus by recognising it's just a blip next to Climate change. Or is that not such a joyous observation?