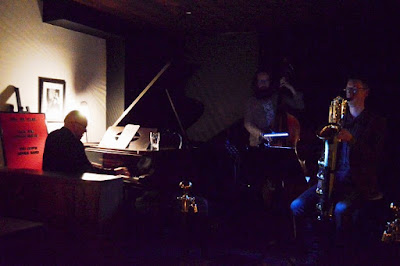 Once again back at Molly for another Covid gig, this time with three of our local heroes playing music of another pair of heroes, Ellington and Strayhorn. The local heroes were Tom Fell, Wayne Kelly and James Luke. I chatted for some of it, but was floored by some understated then immensely melodic bari sax and a similar melodicity on bass and Wayne's lovely bluesy response. Floored is an apt word. James is so lithe in his playing, but also relaxed and diverse and satisfyingly lyrical. And with a lovely, rounded tone. Tom spelled the tunes so effectively then the solos with clear reference to the originals. I guess there was a good bit of transcription in his history, but if not, a good ear and some solid listening. Wayne plays piano, so chordal, so bunches of notes in his raunchy style that contrasted to some degree, but complemented with ease. These guys know each other well and it shows. This was easy and wonderfully effective. The pics weren't so good, they had turned the stage lights off. Well, it is jazz in a speakeasy. A wonderfully satisfying evening with superb playing and a deep knowledge and respect for the classic tunes they were portraying. Fabulous. Not sure what the musicologists would make of my title, though.

Tom Fell (baritone sax) led a trio with Wayne Kelly (piano) and James Luke (bass) playing the music of Ellington and Strayhorn at Molly.
Posted by Eric Pozza at 12:04 pm