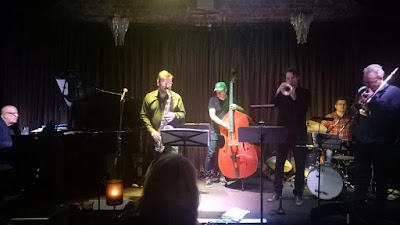 For some reason I was thinking of Smalls through this show. Smalls is a jazz bar in NYC that has a daily video feed. I watch it every so often and I’ve been there. The upstairs bar at Paris Cat was similarly smallish, brick clad and industrial, so some similarity. And the band that was playing had mostly gone to record these very songs in NYC with a few local luminaries sitting in. I doubt they needed it other than for the name recognition. This band was stunning. It was a sextet brought together by saxist/leader/composer Rob Burke with 3 rhythm and three front line and their first gig together in a Covid year. Mostly the tunes were twisted heads opening to free soloing. I struggled to find chords for the first half, if perhaps I could hear them more obviously with later tunes and the Albert Ayler which I remember as twisted rhythm changes with plenty of chromatics. Plenty of chromatics throughout with some devastating solos from Phil Rex and Paul Grabowski and basic-kit power-drive from James McLean on drums. The front line of sax, trumpet and trom passed solos, but not expectedly if perhaps planned. Some great outings there too, and wondrous interfaces with all the back line, and often enough harmonies with the other horns. I wonder if the front line was less chromatic than the rhythm section in solos, but not sure, and more playing on melody and sequences. Whatever, the regular switch of solos through players was not at all obvious and the ideas were rampant and that bass just dumbfounding in its intensity and unrelentingness. My POV, of course, as a bassist, but Phil was overwhelming and the rhythm section was inspiring. And that front line, they were no slouches. So why the thought of Smalls? It was a similar structure of a night and a similar presence that occurred to me. The way they all perused the music to remind themselves before opening and the comments “Do you remember that? / Nope” and the side chatter with some near audience. Perhaps a similar tune structure for open improvisations, too. But this lost nothing to Smalls. This was just a stunner and as good as I can imagine. And that bass.