For posterity, or at least for radio 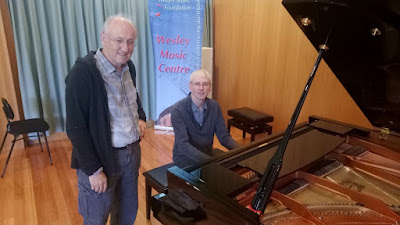 I've recorded literally hundreds of jazz and classical performers but these have all been live shows.  It was something a bit special to track original compositions and to be asked to do it by the composer.  Alan Hinde recently provided a piece for Maruki Orchestra that we played as its world premiere.  A few weeks later I recorded Stuart Long playing four of his piano compositions.  The titles mean little and there was some discussion over apt titles (other than Nocturne or Prelude no.x).  These were seriously interesting tunes.  At one time, Stuart spoke of Alan as our Canberra Chopin.  Megan mentioned Satie when she heard some takes.  Alan himself spoke of the influence of jazz harmonies.  I enjoyed that the three of us could talk jazz as much as classical, with Alan and Stuart having a jazz background along with their classical present.  It's all music and each has its fortes.  We recorded on a new Yamaha grand at Wesley Music Centre, in that acoustically correct space.  What a pleasure and a privilege.  Let's now see what comes of it.