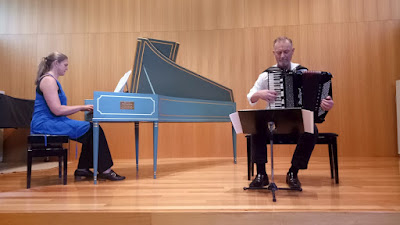 It was a double decker: Anton and Ariana had sandwiched Bach between two Vivaldi sonatas and I had sandwiched my recording between Melbourne and Adelaide.  So we could expect an unusual and slightly rushed affair.  On my part, it was rushed: I managed the audio processing but no time for video.  That takes time.  As for the music, it was a little singular, at least in that combination, but it worked very nicely an in a pomo way that opened our ears to new possibilities.  Ariana was playing harpsichord and it could be lost behind the relatively firm, unrelenting tone of Anton's piano accordion.  They were aware of it but it still was a little issue.  The akkordeon, as named by Anton, was organ-like in its firmness.  Not at all like a violin which it mostly replaced.  And the fingering was probably an issue for Anton, but I loved how he would work the fluid phrasings and how the keys bounced in the fast lines and how he'd punctuate phrase ends with left hand notes or chords.  And it was interesting to talk to him after, with his jazz training and harmonic awareness, talking of chromatics and 1-4-5s and cycles of fourths.  Bach is lovely in his colourations and so often jazzy in his harmonic movements.  And you could hear the richness of Bach highlighted betweens the Handels.  Handel is lovely but Bach is God.  There's a reason for the 3-Bs in fine music.  So, another lunchtime interlude at Wesley with some serious musical musings.  Too bad I missed the real cheese and biscuits outside.  That would have been sandwich no.3.