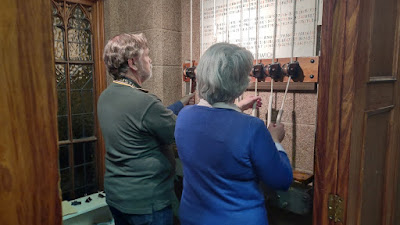 It's learning all round, from the article in the Canberra Times that morning, through to the visits to two bell towers just a few hours later.  I thought there was only one church tower with tuned bells in Canberra, at St Paul's Manuka, and the tuned bells at the Carillon, played as they are, with several fists and feet on several big keyboards.  But no.  There are two other bell towers, each with 8 tuned bells, but not played by 8 ringers (as are the bells of St Paul's) but by one or two ringers, using the "Ellacombe Chiming Apparatus", or more simply Ellacombe chimes.  It's a mechanism that uses static bells struck with in internal hammer.  The alternative is bells that are rotated 360deg and called Full circle ringing, in which each bell requires its own ringer.  Apparently this new apparatus was devised in 1821 by Rev. Ellacombe of St Mary's Church, Bitton, Gloucestershire, to avoid reliance on unruly carousing travelling bell ringers.  They were a bawdy lot!  Whatever, we have two instances here in Canberra and they were rung for the international bicentennial celebrations of the invention.  First bells were in NZ, then through the world, played at Noon in each location, but due to a prior booking, one was delayed here.  Suits me: I heard them both.  First up was St Andrew's Forrest, our deco-influenced post-WW1 not-quite cathedral that is and probably will remain sadly unfinished (lacking a dome and entrance).  I entered as they started, so heard the much more firm and glorious sound outside.  They started with a lengthier Plain Bob Major, then into a series of popular tunes, much shorter and simpler.  The bob and peels and the rest, written for the bells, are intricate mathematical expressions of moving orders.  Quite fascinating.  The popular tunes are just melodies played in a major scale.  Then on to St John's, Reid.  Again we could watch the bell ringer/s.  We arrived a little later and just heard the simpler songs.  The bells at St Andrew's are mysteriously tuned in G# (=Ab, a jazz key) and are in lovely tune.  Those at St John's are in G and not quite so accurately tuned, perhaps showing their age.  Either way, they are delightful.  Bells are a strange obsession that I touched on some time ago and enjoy the occasional visit, I think when St Paul's sounded a half peel for some Civic ceremony.  Maybe they rang for the Queen's visit too.  To learn something about the craft, check out the free app Methodology (Android). 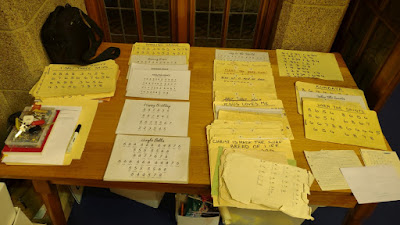 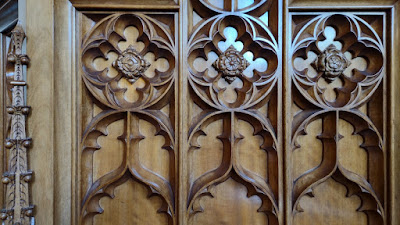 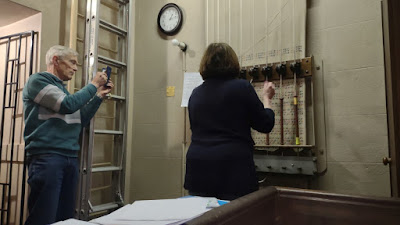 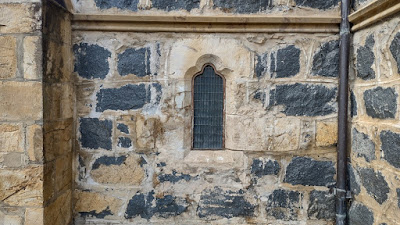