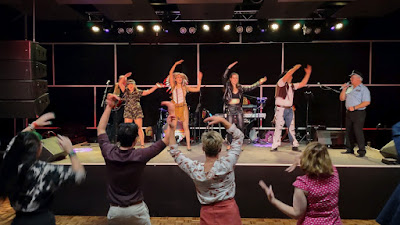 I tell the story of playing one of our "best sets eva" at a wedding and everyone ate and then the DJ put on ABBA and there was a wave of humanity attacking the dance floor.   I makes you doubt the worth of that 10,000 hours.  Maybe not the inherent value, but the cost recovery.  Jazz is like that; in the other way, so is pop music.  It was like that last night.  We were off to the Harmony German Club for a session with HitMania, "the ultimate tribute to the 60s, 70s and 80s".  I like tribute bands like I like pop music.  It's comfy and nostalgic and sometimes the music is great anyway.  There's nothing like a pure melody to impress me.  Not that all this was pure melody: there was much more groove and rock and I-IV-V-I than interesting harmony, but it still entertained.  We even got up to dance at times, to YMCA and the like.  That line-dance-type things are fun and the songs attached to them are very often very loved.  Not so sure about the Chicken dance!  This is also somewhat like my experiences on cruises.  Some decent playing, some popular music, some good times, not too challenging.  HitMania was a big show band.  At least 10 appeared on stage and there was a backstager and possibly the mixer too.  That would be a busy job.  And costumes: tons of them, some jokey wigs, some revealing  tights on a few lithe Las Vegas-style dancers.  So all up, keys, drums, bass, sometimes guitar.  All singing sometimes. A main female singer plus several others who also danced and those two lithe dancers, one who sang, and a MC who also sang sometimes.  Lots of dance routines so lots of practice.  Some games with the audience and dances with them.  The local rock-n-rollers were there but they even got us up for a few tunes.  And the music?  From the Andrew Sisters Boogie-woogie bugle boy, through the 50s then some 60s rock and country then a question to the audience: "what's new in the late 70s"?  I thought punk, but they meant disco.  Wasn't that earlier?  No matter... Then 80s but I don't know that too well.  I was well into jazz and ABC Music to Midnight by then.  And some ABBA, of course.  Look, not great art, perhaps, but great fun.  I enjoy an occasional tribute band and this was bigger than most.

Email ThisBlogThis!Share to TwitterShare to FacebookShare to Pinterest
Labels: HitMania