Travel in these days of Covid 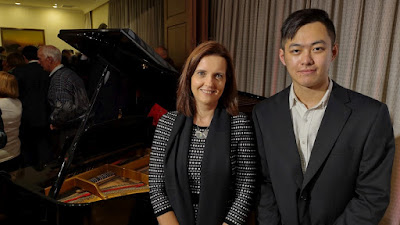 It's one of the pleasures of Canberra to get invited to an Embassy event.  I know one Hungarian well, and on the night I discovered several others that I've known.  And discovered some classic Hungarian foods, including the luscious Dobos torte, and wines.  The main event was a concert by Huangkai (Kaykay) Lai, a current third year student at ANUSOM, winner of various competitions, not least the 2014 Chopin International Youth Piano Competition.  He played a set of solo piano pieces: several each from (Hungarian) Liszt and Chopin, Rachmaninov, Ravel, Debussy, Peixun Chen, Tan Dun and an original piece KayKay had written.  My favourite was the Ravel.  I was fascinated by the styles of the two Chinese pieces.  They sounded programmatic  I could almost hear the goldfish jumping (do they jump?).  KayKay observed that the Chinese and French pieces had similarities, both very picturesque.  I could only agree, especially for the Debussy, Voiles, where you could just hear the wind blowing in the sails with upward flourishes of notes somewhat like those goldfish.  Whatever, it was a nice opportunity night to put on a suit and visit another country, given we can't do that in real life these days.  Another pleasant aspect of the Canberra experience.

The pic is KayKay with Hungarian Cultural Attache Anita