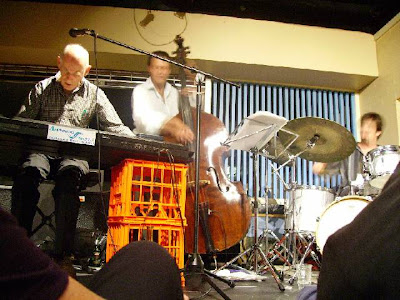 The Mike Nock Trio appeared at the first of the Gods Jazz sessions at the ANU last night. The Trio is Mike Nock, piano, Brett Hirst, bass, and Toby Hall, drums. They all played excellently, with two highly inventive modern sets.

Mike Nock was his usual creative self, despite playing an electric piano with a key that was sticking. He led two sets of mixed standards and originals. Some were quirky, like his “Summertime … so what”. It started with Miles’ “So What” line, which then got Summertime superimposed over the top. Or the beautiful melody of “You don’t know what love is” as a strangely discordant e-piano sound over a free improvisation by bass-drums. But it wasn’t all like this. His “One for the children” (or similar title) was a simple and beautiful piece with a touching, African history, and his “Blue 4” was a great and complex modern blues piece. His improvising is fluid and inventive, and he introduces dissonance and rhythmic complexity at will – a master at work. As a fellow bassist, I loved Brett Hirst’s bass playing. He had a strong, woody tone which was always clear in both accompaniment and soloing. He was also very melodic, reminding me of Charlie Haden in style. Toby Hall was fluid; moving in and out of the music with constantly varying intensity and rhythm.

Another interesting thing was just how much fun they were obviously having. Mike Nock was constantly looking across with respect to his cohorts. Brett Hirst frequently had a smile on his face, occasionally replacing it with a look of intense concentration. Toby Hall was obviously enjoying himself, and occasionally shared quips with Mike Nock.

The Trio is returning, this time with grand piano, at the Southern Cross Club, 8.30pm Thurs 28 September, 2006, ph 6283 7267. This was an excellent start to the series, and was a masterful display of jazz at an international level.
Posted by Eric Pozza at 6:10 pm