Exposed Bone’s performance at Hippo’s last night reminded me of why I love jazz. It was an energetic show, with humour and intelligence and great skill covering a range of modern, popular styles (rock, blues, groove, calypso, klezmer, etc) in various standard and odd times. It’s so much not just history (although, at times, there’s reverence to traditions) or a defined and endlessly repeated canon (despite continued exploration of the standards repertoire). Jazz today is a melange of influences explored by highly trained and skilled artists, with energy and joy to boot. 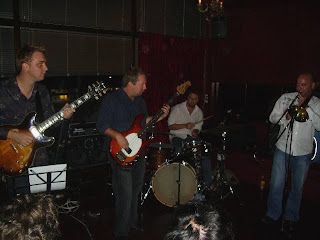 Exposed Bone is Jeremy Borthwick’s band. It plays original music in a world/groove vein. I missed their last performance at Hippo’s, when Jeremy played with the Hauptmann family (Zoe on bass, James on drums and Ben on guitar). This time, EB comprised Jeremy (trombone), James Muller (guitar), Brendan Clarke (electric bass) and James Hauptmann (drums). The fact that the band can change almost totally and still play these difficult arrangements (some even read by sight on the night) is just more proof of the skill levels in modern jazz.

Jeremy plays trombone with fast, post-bop and bluesy lines which seem so hard on this instrument. I’ve mentioned before the current interest in trombones in front lines and EB are a perfect example. It’s a smooth, lithe sound and I guess this matches the modern, sophisticated, lounge/groove audience. I wonder whether synths have brought about the resurgence of the trom, because they do have similar sounds … just a thought. But Jeremy is a master.

James Muller is now an Australian guitarist of world stature, given his recent sojourn in New York, and his recording with Bill Stewart, John Scofield’s drummer. He lifted the band (as guitarists are so capable of doing) every time he started a solo. What amazed me was how he displayed expertise in so many styles. There was rock guitar to die for, sleezy and down-home with wah, volume and other effects, but then he’d morph to fast, clean dissonant pentatonic jazz lines or the broad arpeggios and sweeps of fusion. And to end the night, he played a blues tune with the minor pentatonics and bends you expect in that form. He raised a great flourish of cheers after every solo. I was just a bit disappointed when each solo ended, so I would have liked them to be longer. But what displays of expertise they were!

And the rest of the rhythm section was right there with the front line. It was the first time I’d seen Brendan Clarke on electric bass. He had a fat, soft tone with a high-mid edge and it reminded me of his sound on double bass. But it was that syncopated right hand finger work that propelled the band so strongly. He was obviously having a good time, frequently smiling to James’ flash soloing. He also had a great knack with building tension – eighth notes on one note for one whole chorus at one time, and several other high tension segments with the whole band. And he was no slouch at solos.

James Hauptmann on drums was no slouch, either. He plays a soft rather than sharp sound, and a non-intrusive style. To me, this is a more traditional style, viz. his trading fours in an early tune. But again, he was exciting and energetic with plenty of busy solos and he pushed the band along with incessant rhythms in a style reminiscent of early Weather Report. Great stuff.

BTW, Brendan and James H are local boys made good: both are products of the local jazz school.

I had an interesting discovery. I found when I was tapping along with the beat, it was always on 1-3 rather than 2-4 as in swinging jazz, so I guess that’s a feature of these more popular or world styles. I’d welcome any comments on the theory behind this, and whether the musos out there agree. Just add comments under this post.

In summary, the players were superb, the audience had a great time, the tunes were presumably original, and the vibe was energetic and fun. So, another great display of Australian modern jazz-groove at Hippo Bar.
Posted by Eric Pozza at 5:59 pm