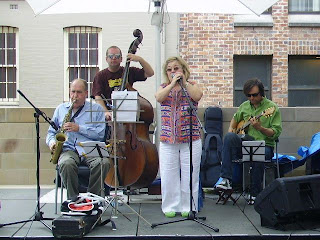 To end, there’s an amusing story. It was spitting lightly when Susan GD announced the band, so she introduced them as “The Rainmakers”, saying it always rained when they played in the Rocks. Within a few hours it was pouring in Sydney city, so maybe this band does good for the parched environment as well as the soul and the intellect.
Posted by Eric Pozza at 6:06 pm