There was a wonderful twin performance (do musos call this a twin-set?) Thursday night to open the White Eagle series for 2007. Aunty Richard and Carl Dewhurst visited from Sydney. As you’d expect from the genealogical naming, these are family: three out of the six players were from Canberra and studied at the local Jazz School.

Aunty Richard started with a highly syncopated groove set. AR is Joel Woolf (tenor sax), Ben Rogers (electric bass) and Tim Firth (drums). It was a great, open sound, especially as a sax trio without a chordal instrument, although Ben played so many chords and harmonics on a beautifully crisp, clear sounding Musicman 5-string bass that perhaps I shouldn’t say this. There were plenty of solos and a really effective interaction between players. Some tunes, if not all, were originals. Sometimes they were fairly simple grooves enhanced with immense dynamics and rich playing, but there were lots of complex time signatures, and changing times in different sections of the pieces. My reading of one (Temptations?) was that it comprised a ballad-like melody moving to an 8/8 passage, then to rock beats, and returning to the slow passage, with a drum solo in 10/8. But there was considerable variation. One tune started with a post bop intro, then into a meditative section, then a hard swing tenor solo with syncopated bass and drums. The set ended with Leaf blower. It was a Joel original. He described it as an outcry of anger and resentment over issues like David Hicks, Iraq War and the like, but brought to a head by a neighbour’s leaf blower one Sunday morning (many of us will both understand and concur). It comprised a heavy, angry rock rhythm surrounding passages which were both brooding and threatening. Nice one. I think this one is one their MySpace site. 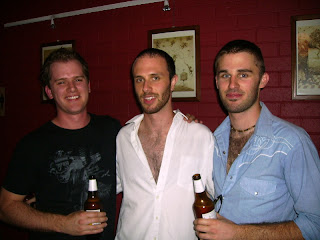 A great, inventive, modern start to the night, and a performance in one of the most interesting branches of today’s jazz. BTW, Ben is the Canberra connection, studying at the local jazz school to 2005.

Carl Dewhurst’s Trio was obviously from another side of the family, because it was massively different in sound and conception, although it too was fabulously well played. Where Aunty Richard reminded me of M-Base and Buckshot LeFonque, CDT reminded me mostly of Cream, although in a jazz vein. It was intense, beefy, muscular, loaded with bell-like guitar solos, very responsive drumming, and a fat, woody, busy bass line.

CDT comprises Carl Dewhurst (guitar), Cameron Undy (bass) and Evan Mannell (drums). In this context, Carl played fast and out. To me, it was a Mahavishnu-like sound and approach. Mostly the tunes were in this style, too: fluid, fast, intense, insistent, earthy, dynamic but not dramatically so. Again, these were largely originals, and with plenty of odd twists. Stutter shuffle was an obvious shuffle beat, but with very unobvious rests inserted as well as a few bars of simple swing. I tried to count the time signature. It was something around 13/8, but it wasn’t that. And on top of that, they managed a fabulous hard swing. Quirky and a huge challenge. Similarly with Pepe le Pieu, which was an equally quirky blues number. And (London) Geezer, dedicated to Cockney culture, which was a rock tune, with endlessly rising chords and a plucked rhythm pattern on the guitar. But just to confirm they do quirky, Carl brought out a Beatle-esque piece called Granite, which really did sound like it could have been from of the White Album era, and followed a little later with a version of Georgia. These two tunes displayed wonderfully controlled melodies along with rich chordal and octave soloing in Georgia.

These are masters at work, and we caught them on their days off from the grind of commercial music making.

So, after Carl and Aunty’s visit, what is there to say other than “Haven’t we got a talented family?”