The Quartet of Peter O’Mara and Barbara Jungfer played Hippo’s last night. Peter is an Australian, now resident in Europe, and showing the experience of performing on 50 CDs. Barbara is German, and renowned as one of the top female guitarists in Europe. So it was a night of and for the guitarists. Hippo’s was right when they announced this as a night of contemporary jazz with blues and groove elements. I particularly heard the blues lines, especially early in the night. But by the second set, the band was warming to more challenging and discordant flourishes, the guitars were out front with dirty and distorted sounds (after more ringing and clear sounds in the first set), and the Melbourne rhythm section pairing of Sam Anning and Ben Vanderwal was displaying its experience with funkier, more insistent beats for the guitars to blaze over. 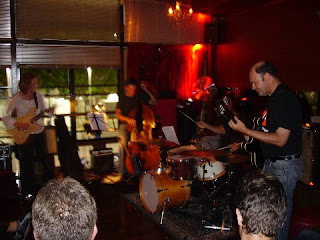 There were solos all round throughout the night. Peter could be bluesy, but mostly he played fast and often discordant lines, with lots of extended patterns, and often with that viscous feel of indefinite pitch that’s a Scofield trademark. Barbara generally had a cleaner sound, although she dirtied up from the second set, too. Her lines could be bluesy too, but then she would move to hammer-on flourishes and what seemed to be almost free jazz styles at times. Sam played plenty of interesting, beautifully rounded and sweet-sounding solos. He was obviously enjoying himself, and got some glances from Barbara, when he managed some fast unison lines with Peter on difficult head later in the night. Ben is a favourite drummer of mine, with correct but always challenging cross rhythms, sometimes using every knockable item within reach. On the night, his solos were kit-based, but lucidly clear in intention and precisely played and never predictable. Lovely. 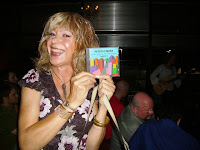 Szusza with a Peter O’Mara CD

They played a variety of tunes. There were several blues with interesting changes and some standards, although the II-Vs were pretty well hidden by this outfit. I recognised a fast Footprints, Summertime in 5/4, and what I thought was How deep is the ocean, and there was a very catholics-like blues and another blues by Scofield or at least in that style (apparently Peter has studied with Scofield). Otherwise, I guess the tunes were originals, in a blues-infected, backbeat-rich style with plenty of room for solos.

It was a nice return to Hippo’s for the new year. Hippo jazz gigs are on every Wednesday at 9pm, and they are always worth the visit. I don’t always list them here but there’s a link at the top right of the CJ home page.

So unusual to see a night of jazz featuring two electric guitar players both trading solos...thoroughly enjoying and nice to see such a large smoke-free crowd there too.
Not sure though about that girl photographed holding the Peter O'Mara CD!