In from Melbourne, off to Moruya

Leigh Barker and his quintet played at Hippos last Wednesday to launch their CD. It was a strongly local affair. The band is from Melbourne, but 3 of 5 are from Canberra and studied music here. Even the title of the CD was a giveaway: “Off to Moruya” was an obvious reference to our local and intimate jazz festival down the coast. The band is John Felstead (soprano, alto sax), Eamon McNelis (trumpet), Al McGrath (drums), Matt Boden (piano, accordion) and Leigh Barker (bass). FYI, the locals are John, Al and Leigh. 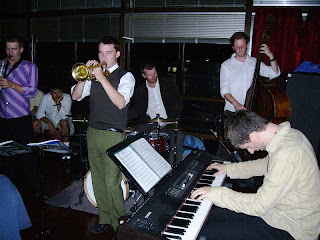 It was an interesting set. I was initially taken aback with a pretty old-style sounding jazz tune to start the night, Ellington’s "The mooch", and I wondered if this was to be outside my normal (modern) expectations. But any competent and serious artform knows and respects its history, and this was evident as I listened some more. This was a modern interpretation. It displayed considerable fidelity to the original, but the solos were often in a more modern vein, with dissonances not necessarily heard in the original versions. So, to me it was interesting and an eye-opener to other approaches to jazz.

This was music with a laid-back nature, thoughtful and considered. It was frequently composed and complex, but then opening to more individualist solo passages. I noticed a distinct change in the band’s sound when Matt moved between accordion and piano. The piano segments were richer with more complex harmonies and more modern solos. The accordion offered a more folky accompaniment, and while soloing was harmonically simpler and more dense with chords rather than single note runs. To me, John played the most harmonically challenging solos on the night (which saxes are apt to do anyway). I enjoyed following one particularly clear-cut solo which moved through scalar lines, diminished arpeggios, patterns, some nice licks, 4ths and the like: neat and cleanly structured. Al played some really impressive, clear, fast, diatonic bop-style solos, but also went out often enough. Leigh and Al supported with a rhythmic underlay which harked back to pre-modern styles, often playing a cut-time beat (2 beats to a 4/4 bar) on drums, and a matching two-feel bass line within a 4-to-the-bar walk. Occasional concurrent solos by the horn front line just confirmed the underlying pre-modern style of much of the music.

I enjoyed the Ellington starter and it seemed very appropriate, but otherwise the music was original. There was a suite written for the Merimbula Jazz Festival in two parts with a lovely discordant melody by multiple instruments to start the second part. There were ballads and funny titles. We were advised that “Attie’s exit” related to “Ray’s dilemma”, but we are none the wiser than that.

Nice stuff all around. So it seems Canberra is providing players of note for both the Melbourne and Sydney jazz scenes.