Jazz a la Turc or a lust to wander?

The Multicultural Festival gave us a free afternoon of two very different forms of jazz, from Turkey and Australia. It was interesting to hear Turkish jazz. It wasn’t on my personal horizon, but Turkey is an intriguing country, and jazz is an international art form, so I was looking forward to it. And I always look forward to the world-jazz style of Wanderlust. 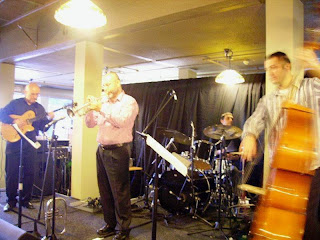 I had expected more unusual sounding Middle-Eastern scales and rhythms, but Turkey has always been a crossover point between East and West, so perhaps I am showing my ignorance of the local popular and folk musical forms. There were relaxed rhythms and gentle melodies, some latin-inspired liveliness, and at least one tune from Azerbaijan provided some Middle-Eastern sounds. We were all amused by some of the titles of the tunes they reinterpreted. Onder introduced the tunes with Turkish titles, then proceeded to translate them to considerable mirth. One theme covered wood burning in a guy’s fireplace. Maybe this is symbolic, but it gave everyone a good laugh on the day. 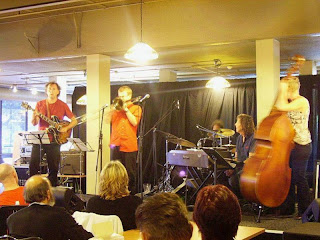 If you can’t travel, then you can at least lust for it. So it was appropriate that Sydney’s Wanderlust played the next set. But Wanderlust was without its leader for the day. Apparently Miro was satisfying a wanderlust of his own, and was in Czechoslovakia. But jazz musicians being as well trained and capable as they are, they presented a fabulously capable, infectious, intelligent, well-received show, just sounding a bit different with a guitar/trombone frontline, no trumpet solos, and the amiable James Greening as leader for the day. This band is always so right, so infectious with its gentle rolling beats and world-wise melodies. It’s the right thing for a joyous, lazy Sunday afternoon. It’s a walk in the park, but with huge skills drawing us along.

On the day, Wanderlust was James Greening (trombone/pocket trumpet), Jeremy Sawkins (guitar), Alister Spence (Rhodes piano), Zoe Hauptmann (bass) and Fabian Hevia (drums). James presented his usual master trombone solos, and entertained with amusing interludes (those present will remember with great mirth “one button out, but compared to the rest of life…”). Alister was an intellectual treat with incredibly exploratory harmonic treatments over that trademark Rhodes sound. Zoe is an ever-reliable rhythmic foundation, and I was stunned when even her solo which exuded rhythm at such a fundamental level. Fabian was blissful with solid rhythms and intensely rich cross rhythms speaking of Brazil, or more likely his native Chile. Jeremy was new to me. He played mostly in a staccato, biting, disjointed style, but then there was a layered solo passage of synthetic sounds and loops at one stage, and some big, distorted chordal work at another time that was so contradictory to the rest of the tune, but so apt.

They played originals by several of the members, including a few by Miro: titles like Year of the pig and Mumbo gumbo. I recognised Dakar (a “dark and mysterous” piece in 9/4), and of course they finished with their hit, Bronte Café. It sounded strange with a frontline of guitar and trombone, and I thought it missed some rhythm guitar (the guitar taking the melody role on the day), but it went down a treat and finished on a high.

Great concert. Thanks to the Multicultural Festival, the Tradies Club, and the players.