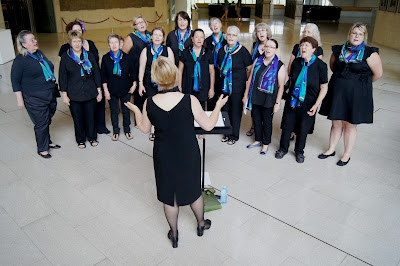 Cyrenes is a women’s choir. I can’t think of a choir of massed voices that I’ve heard recently that’s not a mixed choir of male and female voices, SATB (Soprano-Alto-Tenor-Bass) or thereabouts. There was Chorus of Women but they were a quartet. I was wondering if the tone would be strident, thin, too light and high for my ears, but it was nothing like that. In fact, I was surprised by the low voices of several few bass-like lines. I shouldn’t have been. There’s plenty of crossover between the sexes, not just in pitch of voices but we hear it in voices, too: counter-tenors singing with altos; here, women singing higher tenor lines. This wasn’t just sky-high soprano, but forceful and confident groove-setting. So, my first impression was the broad sweep of pitch and effectiveness of the parts. But on the other hand, I was mightily impressed by several pure, airy soprano voices that floated above the ruck. This was not power but beauty. It’s what I initially expected from a female choir but, of course, it’s just part of the mix. And this whole was a comfortable and welcoming mix. I felt the voices and phrasings sat well together. The Cyrenes have been together for 20 years and they sing with a conductor and without charts and this all helps listening and expression. They were comfortable musically and welcoming personally and it shows in their sound.

They sang an interesting mix of modern and world styles. They walked onto stage in subgroups singing Alleluia. They sang Joni Mitchell (Big yellow taxi) and James Taylor (Lonesome road) and Mary Chapin Carpenter (Why walk). Also referencing the ‘60s but very different in style were a musical setting for words from Khalil Gibran (The Prophet) on the role of parents with their children, and Kumbaya (thankfully, from the Soweto Gospel Choir rather than the campfire). These are easy tunes to denigrate, but I enjoyed them, especially the Prophet. Perhaps because I never had it in a poster on the wall, so I never knew the words, or perhaps because I was a child then and it’s really a truth for adults. There was innocent jazz (Blue moon) and a few other songs of folk truth that I hadn’t heard before. But my favourites, as musical presentations, have to be the two African tunes: a traditional Zambian farewell song in call and response format called Thamba and a South African song of sending love called Thuma mina. There’s an earthy emotional resonance in these songs that’s refreshingly different from modern cosmopolitan life.

So I found the sounds and voices lovely and sometimes beauteous and not at all shrill or tiring. But perhaps I’ll take away a memory of women’s business. These songs all said something: sometimes in words; sometimes in the emotional truth of the music. Many of these women would be mothers, and I can see the honesty and guidance and care of mothers and more widely, of women, showing through. And as they dissolved into the audience after the gig, with children in tow or friends and family around, this was just confirmed. Nice music well sung, but also true expression. Not really siren-like at all. Cyrenes performed at the High Court for the Canberra 100 Musical Offering. They were led by Glenda Wadsley with singers Mary Martin, Anne Gardner, Bron King, Lucy Ferguson (sopranos), Judith Cubbage, Charine Bennett, Merilyn Jenkins, Lois Wishart Lindsay, Louise Gell, Angie Corcoran (altos), Jane Hardy, Vicki Bell, Pamela Foster, Kathy Walsh, Karen Cook, Jacquie Reid (tenors and basses).
Posted by Eric Pozza at 9:32 pm