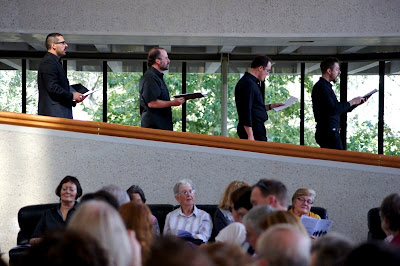 The pre-modern era remains with us. The turnout for the Pocket Score Company at the High Court just confirms it. Not that it means we really understand it. We see the beautiful and aged buildings in Europe; we hear the glorious music and associate it with cathedrals. It’s a trivial example of our lack of understanding, but I remember the disappointment when Michelangelo’s Sistine ceiling was restored as vivid colours.

It was similar with some of the music the PSC sang. We think of towering cathedrals and monks singing religious themes, but at least one equally beautiful song was downright bawdy and there was a love song from Abelard to Heloise. There was a song that depicted Parisian street with three parts that spoke over and above each other while musically entwined. Another song comprised lurid hints of debauchery with the male, a fine oarsman, singing his exploits and the female fretting about the size of the barge. But they were sung in various languages in various olde forms, so we could just ignore the words and luxuriate in the male voices. Which is what I mostly did: enjoying Ian’s deep bass with David’s countertenor and Paul and other David’s two tenors. Maybe it was just in some songs, but I loved it when the two tenors ranged high, so we had three males up high which just accentuated the pure and deep bass below. Otherwise, I couldn’t help but relish the intertwining lines of melody. They sometimes echoed between voices like in a round; other times they were sung like layered harmony with matching phrasing. For one tune, Ian accompanied with a gentle and billowing hand drum. And they presented well. They had started by walking the ramps into the performance area for Abelard’s chant, then the French street scene had singers moving from backstage to congregate at centre. Nice informative introductions, too. These are confident blokes singing olde music and it’s popular. I like it that we have this touch of mediaeval / renaissance Europe here in Canberra and it even fits the modern, concrete brutalist cathedral which is the High Court. Pocket Score Company are David Yardley (countertenor), David Mackay (tenor), Paul Eldon (tenor) and Ian Blake (bass). They performed at the High Court for the Canberra 100 Musical Offering.
Posted by Eric Pozza at 10:34 pm