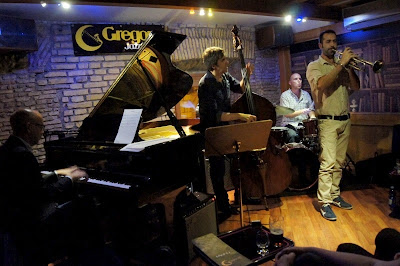 I’ve often pondered that only 12 notes can make all (Western) music. Branford Marsalis said much the same thing in an article I read with the implication that nothing we play is new. I was thinking that while I was listening to a the band at Gregory’s jazz club in Rome. I expected Fresh Fish Quintet but I think I only got one or two of them with some mates. This was a quartet playing standards and modern jazz tunes.

They started with Moment’s notice and followed it with September in the rain, and I was revelling in the grooves and interplay and solos that spelt out the tunes with great clarity and the styles with no jarring. So I thought of those 12 notes and how they can be played with the right feel and the right conception and then it’s satisfying. The piano was concentrated, playful, toying with harmony but focussed. They played Joe Henderson and the trumpet felt insistent. Then later a Cedar Walton tune, and I thought of Freddie Hubbard. Then What’s new, and I realised how the bass was spelling the chords, full toned and harmonically clear. Always with a busy substrata of drums. Then listening to the whole, I felt the responsiveness in the piano comping and throughout in the rhythm section. Alex Boneham had suggested this club and the drummer had played with Alex and also plays with Sarah McKenzie and Hugh Stuckey. It’s a small jazz world. Then some sit ins for the second set. Alice, female vocals, for two songs: I only have eyes for you and End of the love affair. It’s a surprise to hear the words after hearing the instrumentals so often. I’m taken by the dense tragedy of the words and intrigued by the just slightly accented English: “I'm reckless it's true, but what else can you do…”. (It doesn’t work quite the same on paper). Then two tenor saxists sit in for a few tunes, There will never be another you and Well you needn’t and whatever Bebop with another drummer. Then it’s 2am and the band ends; Gregory’s starts late: 10pm. Luckily I’m close so no issues with transport, so it’s a relaxed outing. Great music, though. Standards and jazz tunes played as they should be, with just the right use of those 12 notes. All those transcriptions are not for nothing because this is a culture and you have to learn the language. These guys may be Italian but they speak jazz with aplomb. A great night at a lovely little jazz club. The band was Francesco Lento (trumpet), Pietro Lussu (piano), Francesco Puglisi (bass) and Marco Valeri (drums). The sit ins were Alice Ricciardi (female vocal), Phil Allen (tenor), Filippo Orefice (tenor) and Emanuele Zappia (drums). The venue was Gregory’s Jazz Club in Rome.
Posted by Eric Pozza at 1:48 am