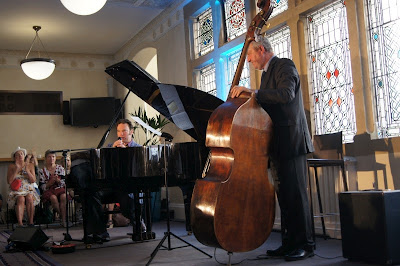 This was a Prom concert, but of a different hue. Gareth Williams and Dave Green played a respectful revisit to the Bill Evans / Scott LaFaro songbook for the Out to lunch series at the Cadogan Hall. The Cadogan Hall is the home for the London Philharmonic but this was actually in the café which was an intimate and appropriate venue. It was standing room only when I arrived, and it was nice that you could stand: no-one turned away. Drinks and food available. Victorian columns and stained glass, but this was a good jazz venue. Largish, relaxed and well attended. I also noticed that this was a different crowd from the beautiful and very obviously wealthy inhabitants around Sloane Square. This is Belgravia and replete with Mercedes and model-beauties and suits and Harrods and the Saatchi Gallery. But it’s also attended by this dressed down crowd and the delightful Holy Trinity Anglican church, “cathedral of the Arts & Crafts movement” (see some pics below).

Gareth first recorded with Ben Webster and has played with a string of internationals since. Dave has won Top Bassist at the British jazz Awards many tiemes. Both are current winners of their instrumental categories at the British Jazz Award 2013. They are no slouches. But also they have each immersed themselves in their respective performers: Gareth (piano) in Bill Evans; Dave (bass) in Scott LaFaro. So I was not surprised to hear Bill’s inventive harmonies and reharmonisations and his use of intervals and playful sense of time and sheer bluster in long passages. And Dave was fluent and lyrical as we’d hear from Scott. These may not be transcriptions but they are respectful and in style, as was the playlist: Autumn leaves, Waltz for Debby, My .foolish heart, Someday my price will come, Lucky to be me, Young & foolish, Gloria’s step, Spring is here, In love in vain, What is this thing called love. Gareth did decent vocals on Everything I love and Come rain or come shine, but I must say the instrumental segments were where the thrills were. To finish up, the take on What is this thing called love was the most stunningly obtuse and inventive of them all. It all just makes you want to return to the early ‘60s. I don’t believe that jazz died in the 60s, but with music like this is was certainly alive at the time. This was a wonderfully strong recreation and response to these two figures of jazz by two players who have immersed themselves in their styles. Great skills and an eye-opening, historical visit.

Gareth Williams (piano, vocals) and Dave Green (bass) played the Bill Evans / Scott LaFaro songbook at the Cadogan Hall in the heart of Chelsea in London.
Posted by Eric Pozza at 5:36 pm