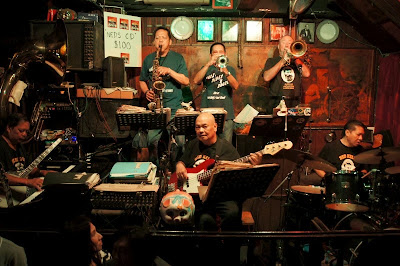 It’s not quite a touch of home, but I heard the China Coast Jazzmen at Ned Kelly’s Last Stand in Hong Kong. I’d seen this bar on a previous trip. It’s in the lower streets of Kowloon and amongst the sort of restaurants I like to seek out. It’s a timber rich environment with Aussie references and beer on tap. So far, so good. The band plays nightly (that was a revelation) from 9.30pm and I passed by just at the right time. For the third gig in a row, I thought of Branford Marsalis and his comments about popularity and jazz*. This time, about novelty, how reinvention is sought by reviewers and followers and how this limits an audience. The China Coasters play every night; they are obviously well received by keen followers rather than obvious jazz aficionados; they earn for themselves and the bar. I noticed their charts with dog ears and yellowing edges (how old are these?) although I thought they pulled some plastic covers from their folders. I laughed along with the huge clapper hands inviting audience involvement and the corny, unpretentious vocals of the era. I loved the swing of Misty and the horn arrangements. This was par for the course: nothing unexpected but harmonised horns sound so good and lift a solo no end. I enjoyed the solos, ordered and short as big band solos are. There was little that I hadn’t heard before, it's nicely rough, the bass was electric not acoustic and the chords were fairly simply stated. But there was good cheer and non-jazzers were having a great time. There was big band swing and cut-time trad / New Orleans with collective improvisation. I knew the later standards (Misty, Taste of honey) although not the older tunes, but the cycling chords were obvious. This was good feel and good cheer and the dead pan faces of the working horn sections. I enjoyed it; I chatted; everyone took photos and drank beers and ate chips and hamburgers. Nothing too evidently sophisticated here, although I’m sure Ellington would have made a showing sometime. Much enjoyed.