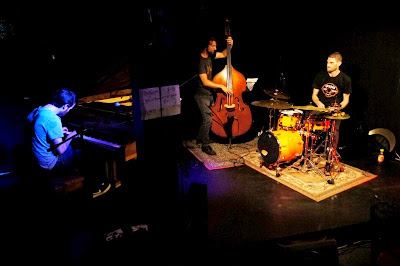 Casey, Bill and Ed - the Casey Golden trio - are friends of CJ and I've heard them and written of them here several times, but I was still surprised when the music started. This was so quiet. Bill's tone was so close to acoustic. It's what they try to do, but it's uncanny. He had an amp. You almost wouldn't know it but you know he must have one otherwise you wouldn't hear him when he plays quite so gently. Bill can ring a string but often it's just a touch that forms a note, placed just right, sparse, unadorned, nothing excess as this is. Ed is doing something similar, always responding to Casey, always active but it's big tension under tight control. It's accompaniment and colour and interpretation more than obvious beat; the beat is there but implied.

I feel Casey is the core, but that's nothing unexpected in a piano trio. He's playing richly embroidered lines or dense, complex harmonies. I follow a melody line and it's long and contorted before it repeats. I listen to the most colourful of harmonies and wish for a piano to do this justice. The tunes were all originals from one or another CD, especially their new one, Outliers, that's had good reviews around the world. And from another, Live at Bennett's Lane, recorded for Mal Stanley and ABC. The covers are all stark in complex black and white drawings; the music is similarly precise and resolute. They played a swinger at Geoff Page's request: Herbie Hancock's Dolphin dance, that wonderfully musical modern theme. I felt it was an entree to their thinking and playing. Again, the precision and listening and gentility; the melody appearing often but not interminably; the swing swung, but interspersed with spaces and implications; still the quiet engagement with each other and the music. It's easy to receive originals in their own context, but to hear a reworking like this on a known piece was a revelation. All strength to Casey, Bill and Ed. Profoundly satisfying stuff played with outstanding skill.