The Straighteners are at it again 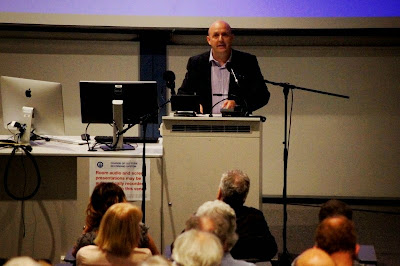 It was the sixteenth Manning Clark lecture and Richard Denniss of the Australia Institute gave it and it was recorded so you can hear it sometime on ABC RN Big Ideas. RD introduced the lecture as having two parts: what can we learn from Manning Clark and what will Australia be like when it grows up. The first part was very obviously familiar Manning Clark territory: Enlargers and Straighteners / Punishers. Much economic debate preludes talk of choices and talks only of means using a simple and perhaps misleading measure, the GDP. The Punishers have, very cleverly, managed to claim the role of Straighteners while acting the role of Punishers. [I could only think of the current line, that to save Medicare we must increase charges]. RD looked back 100 years. Most occupations were different from now; GDP didn't exist as a measure; any predictions would ignore mobile phones and the Internet and fret that whalers' jobs would be devastated.. And yet we are now the richest we've ever been and in one of the richest countries (and cities) in the world. Economic forecasts are consistently wrong and many predictions are just projections of the present. So how useful is an Intergenerational Report (or political audits or other), other than to scare us and remove discussion of options. [I wonder how much climate change will be discussed in this new report; that's one thing we can predict with certainty will happen over 50/100+ years]. RD likes to put all this in earthy terms: "making crap up"; predictors out 50 years are "kidding themselves"; "starving the beast" (a US neo-con expression, meaning to starve government of funds). Think on these facts: Australian debt has been up to 150% GDP twice in our history; GDP as a measure didn't even exist until ~1940s; the ABS only started releasing summary stats after WW2; the pension has dropped from 34% of average wage (1915) to 25% (2015). RD praised the Punishers for their success, although not for their outcome. He argued that this simple story of GDP and finance is used to effectively remove the possibility of discussion of choices and ultimately benefits the wealthy. Create fear and offer a simple solution; get people to vote against their interests; when the economy slows, cut spending to the poor and when it speeds up, cut taxes to the rich. It's hard to question that summarisation given recent Australian history (unfairness of last budget; tax cuts under Howard) and the growing maldistribution of wealth across the world and the famed 1% ("There's class warfare, all right, but it's my class, the rich class, that's making war, and we're winning" / Warren Buffett quoted in "In Class Warfare, Guess Which Class Is Winning" by Ben Stein in The New York Times (26 Nov 2006) http://www.nytimes.com/2006/11/26/business/yourmoney/26every.html viewed 4 Mar 2015).

I was amused by the theme of the second part of this talk, What will Australia be like when it grows up? This part of the presentation seemed weaker to me. The main themes were: we should decide our direction (our choices) and not our goal, as a goal is impossible to determine over decades anyway; We should implement policies that move towards those choices; change happens anyway, so don't worry over much about short term change (coal miners out of work? Think of those whalers from our past); don't prevent change, but support people affected by change (invest in retraining, education, support); be honest with our values and turn them into actions. Nearing the end, RB did give a prediction on the economy in 2015, despite he previous protestations: that we will have one. There was a little more, but that's the gist and I had to leave for the Gods.