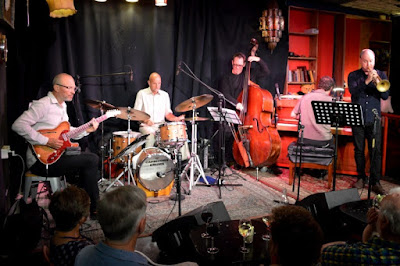 Jonathan Zwartz was in town for Geoff Page at Smiths and the room was full with Geoff's coterie and the music was to die for. Jonathan is renowned for his writing: three albums to date, superbly written, intriguing, rich and complex, nicely grooving and touching on real social concerns. But it's not just the writing, for the band was also to die for. Was it Geoff or Jonathan who introduced them as amongst the best in Australia? Doesn't matter: they were.

So unforced, relaxed, tight, never an accent out of place, every embellishment a pleasure, a fabulous bass tone (a personal interest, but relevant), excellent solos nicely merged into heads. Some amusing banter between tracks, and that's worthy, too: "Being a bass player, you always do everything with one hand. It's a ... drag" (another thing I understand) or "It's kinda that vibe ... singalong it you want". Not that there was any singing to singalong with, but the groove was light and bluesy for that last tune. And generally the styles were varied. Emily was the one swinger, played medium tempo with walking bass, and dedicated to a friend's new child. Dollar Brand was a reference to Abdullah Ibrahim using his early name as the tune was originally called Dollar and "it's kinda that vibe". Milton was a bossa for Nascimento. Julien Wilson's sound of love was in the style of Ellington/Strayhorn and genuinely sounded that way, not least for one lovely, classic repeated turnaround. The tunes were mostly from JZ's latest/third album, Animarum. Phil took most lead and solo roles and blared in classic chordally-enunciated style. Hamish was varied in style and studio-sharp in interpretation. Carl was devastating from rapid runs to blues-rich bending. John joined for the second half: he used to play with these guys in Sydney before coming to Canberra for the ANU. He can be devastating but played fairly restrained and tuneful on this night. Always fabulous, either way. Matt McMahon can take tunes and explore them with rich calculations and investigations although I found him just a little distant on that piano on that night. Jonathan is restrained but big and strong with the greatest of jazz tones and fabulous sense of time and rhythms and grooves and some glorious runs when he lets go. But he remained the overseer and fairly restrained. And the music was just that: purpose before excess; art before skills. One of the best.