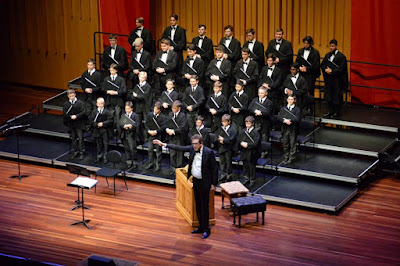 Our experience of the Choir of Kings College, Cambridge, was different from that of many others, and there were many others at Llewellyn Hall for the concert. It was pretty much packed, upstairs and downstairs. The choir huddled in a square on stage, younger singers in the two first rows; older choristers in another two rows behind. In front were conductor Daniel Hyde, an organist, and accompanists Alice Giles and Umberto Clerici. Alice also performed solo (Cavalli). The choir mostly performed in full, although there were pieces in the first half for the young'uns and for the King's Men, as the seniors are called. The King's Men perform and record separately. The choir consists of 16 boys from age 7 and 15 male Cambridge University students. The boys sing treble; the students sing alto, tenor, bass, split approx 4/6/8. Singers generally remain with the choir for 3 years and it's hard work. They perform evensong 6 nights per week during term, as well as practice and tours. The seniors also perform as the King's Men. This, in addition to a heavy academic workload over short 8-week terms. Not sure how many terms per year. So, how was our experience different? We billeted two students, Trojan and George. Trojan was studying music and sang bass; George was studying classics and sang alto (also bass?). But what of the concert? Canberra got program no.2 covering a range. The early works were from Bach and Byrd, Tallis and Gibbons and Monteverdi. Then through Britten and Vaughan-Williams to contemporary. Ross Edwards provided the Australian relevance with a new commission, Singing the love; Weir and Wallen provided contemporary English compositions. Wallen's Pace (=Peace) was introduced as "hear a pin drop" material and it was true: beautifully soft with unexpected dissonances that resolved (perhaps too early for this jazz lover) then reformed. Lots of harmonic colourations with staggered breathing. Funnily enough, someone did drop something tinkly and needle-like near where we sat during that tune. That was my favourite for the night but I was enamoured by the clarity and also strength of sound of all the works by the choir in that big Llewellyn space. The second half especially had me in raptures. So, a memorable concert of precise and historical voices and an interesting interaction with Cambridge, the university. This visit will just have to suffice until we get to Evensong in the chapel, when next in Cambridge. 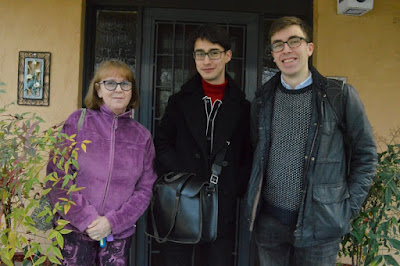 The Choir of Kings College, Cambridge, performed in Llewellyn Hall. We billeted George Gibbon (alto) and Trojan Nakade (bass).
Posted by Eric Pozza at 11:10 am