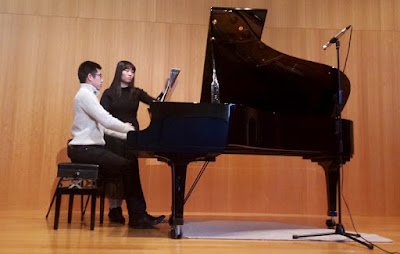 And next week came and it was also great. Aaron Chew returned to preview the other half of his PhD recital, die in a few months. This is the warmup: a warmup to virtuosic and beefy music. Aaron is reading on Busoni and presumably some relation to Liszt, as his compositions feature. This concert contained several arrangement by Busoni of Liszt. A student at PhD level is interesting for the intellect as well as the performance, so Aaron introduced each piece with a short but relevant presentation. So, Busoni was more faithful to the original in his Mephisto waltz, but also featured "beefed up: harmonies and more drama and spice. Or the delicate bells of Liszt in La Campanella became harder and more sculptured in Busoni's version. Interesting, especially effective with the colourful and indicative descriptions. Again Aaron's concert gave wonderful renditions and a satisfaction of real musical intimacy. For the record, the program was Liszt-Busoni Mephisto waltz, Liszt Reminiscenes de 'Norma' and Liszt-Busoni Etude no.3 C#min 'La Campanella'. A great pleasure. Now we can all await Aaron's recital sometime in October.

Aaron Chew (piano) performed more Liszt with reference to the pianism of Busoni at Wesley.
Posted by Eric Pozza at 2:34 pm