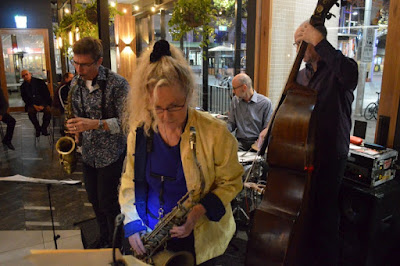 It was Geoff's Jazz@Lab outing, this time at AlterEgo, with the most incredible band comprising some of our most renowned Aussie performers: Sandy Evans, Andrew Robson, Lloyd Swanton and Hamish Stuart. Stars in their own right and a work of bliss together. The room wasn't the best - the smallest of stages split a long room in two - but the fabulous playing and compositions defeated all that.

I was amused to watch passersby passing the door behind the stage where you could hear all pretty well. Some noticed and responded, perhaps challenged or perplexed; some just walked by; a few came in. This is not the stuff of commercial radio and this was the commercial heart of Civic. Andrew's compositions channelled Ornette to my ears: spiky and twisted but also an inevitable fit. Sandy's works went off, but in a different way. I was all smiles and admiration listening to the group dissolve into free then recompose itself just before the interval on one of Sandy's tunes. This was Sandy with Andrew's trio but these people are friends and have played together forever so it's a knowing coming together. As often, they featured one tune by Sydney jazz mentor Bernie McGann, Salaam, inviting Miro to sit in. His solo was different again. As were Hamish' and Lloyd's, on their different instruments, both setting down the most delicious and inevitable extemporisations. At this level, it all sounds so right, not fast or flashy (although speed makes its appearance when it fits) but with that feeling of continuity, inevitability, correctness that the great improvisers display. This was a great concert with intimacy despite a difficult room. Maybe that even helped, as challenges can. I missed Ornette at the Opera House so this will have to suffice, and suffice it will, with ease. A fabulous display. Many thanks.

Sandy Evans (tenor, soprano) played with Andrew Robson (alto, baritone) and his trio comprising Lloyd Swanton (bass) and Hamish Stuart (drums) at AlterEgo for Geoff Page's Jazz@Lab series. Thanks to Bob Howe for some pics from the night.
Posted by Eric Pozza at 2:54 pm