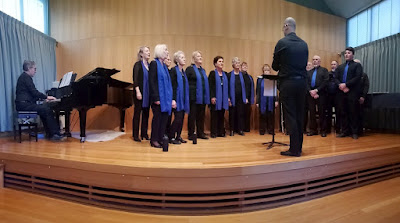 It was an unusual concert at Wesley. This was music of the jazz era sung by a jazz choir with piano accompaniment. I just don't expect rhythmic rhapsodies at Wesley, but there they were. They were short a few sopranos who had come down with colds, but this was a lovely satisfying thing anyway. I was entranced from the top with a fascinating and neatly constructed intermingling medley called Rhapsody in rhythm, featuring Crazy rhythm, Fascinating rhythm, I got rhythm and Rhapsody in blue, not just as a simple run of tunes, but nicely overlaid and interspersed. That was some great arrangement. This one was not by a band member, but others were. Musical director Camilo Gonzales writes and arranges and provided one tune, a version of Cry me a river. And Mike Dooley, piano accompaniment, writes prolifically and featured three songs from a gospel CD he has written and RS is recording. So, quite a range, here: from jazz era to Carole King and Cry me a river which was performed by many but which I first encountered by Joe Cocker, of all singers. There was life and pleasure in this group, some great arrangements and harmonies and nice, tricky rhythms and some excellent accompaniment from Mike, not least some insinuating and perfectly timed ostinatos and a few little opportunities for solos. So a great pleasure with some foot-tapping tunes.

Rhythm Syndicate performed at Wesley under Camilo Gonzales (musical director, conductor) with accompaniment by Mike Dooley (piano).
Posted by Eric Pozza at 8:56 am