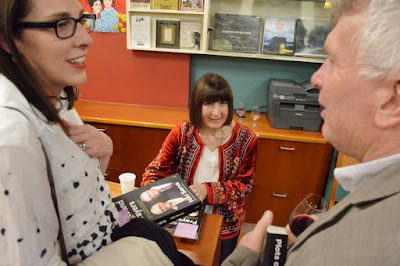 A political book launch in Manuka will bring out the political actors, Canberra being the heart of federal government. Perhaps more-so when it's a surprise tell-all with attributions and the author is a journo at the Australian who had worked in the office of Liberal treasure (Costello). It's a fascinating experience in some ways but also revealing. One thing I notice is that the revelations are usually not too surprising. Being somewhat a political junkie, I hear much of this and it is mostly available in print or on radio. Another thing is that I'm not too good on the personalities. It was Megan who commented that the old bloke we'd shuffled our seating for was Tony Eggleton. I hadn't recognised him. Nor others. We did get to chat to journo Paul Bongiorno about a great uncle of mine who used to sell pasta to Paul's father's grocery store.

But that was about personal matters not politics. This was the launch of Niki Savva's new book on the Turnbull putsch. It's particularly interesting for her connections and especially for the attributed comments that were given before an election that was then considered lost. So apparently the rashness was rife ... or should we say honesty? The title is Plots and prayers : Malcolm Turnbull’s demise and Scott Morrison’s ascension and it follows her success with The road to ruin : How Tony Abbott and Peta Credlin destroyed their own government. Henry Rosenbloom, publisher of Scribe press, started the evening off, then Laurie Oakes launched the book proper. He introduced with references to a current love, crime fiction. The discussion was quite damning of current politics; "a depressing book" . He spoke further on despair and current politics; the current "embarrassing ineffective rabble" and comparisons with Hawke's time; the wrath of the DelCons which was felt by Niki for her previous book; Corman quoted as the "ultimate seducer and betrayer"; an ability to "utter inanities" as one of Morrison's strengths (but not that he's the first!); that the media has some responsibility for being so close and caught up in the games; finishing with the observations that "all political careers end in tears". The observations were damning, and that from such a long-standing and admired political journalist, but particularly telling as it came after a few years outside Parliament House. I hate to talk of the "bubble", for that's just served as an excuse for Morrison to avoid discussing LNP failures and scandals, but there is some truth in the term (not that there aren't many other "bubbles", in politics and out). Niki Savva then got up to give thanks. She spoke of how she had been shocked by the revelations of these interviews; shocked by Corman's sudden change; predicted it will end poorly for Morrison, seeing him as clever but cold blooded, joking that Divine intervention would have been from an Old Testament God; how the moderates had sacrificed Julie Bishop; how Dutton is more liked by mates of left and right than Morrison (this seems a surprise to many, including me); how several had literally shed tears after the stress of the Turnbull affair (although I could only wonder where the tears are for New Starters or RoboDebtees). Like I said, such a booklaunch is always interesting and revealing and to some degree confirming what we read daily, if we read. And some free wines and party and paper spotting, too, so quite good fun.