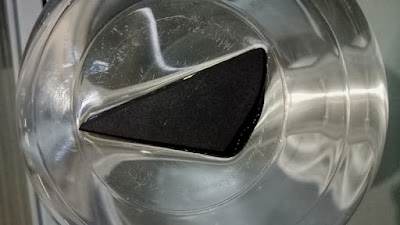 Not jazz or even the arts, but it is of historical and scientific interest and this is the 50th anniversary of Apollo 9. It always amuses me to touch something of extraterrestrial origin. We can argue that we do that every day with everything we touch, given that our atoms all come from elsewhere, formed in the Big Bang and converted to more complex elements in various stellar processes. But it remains something exciting to touch the Moon or Mars or otherwise.

We've had a piece of Moon rock here at the Tidbinbilla tracking station for years. It's nicely glittery but it's behind glass. We now have a piece of polished Apollo moon rock to touch in the foyer display at Geoscience Australia. There's also a piece of Mars, some more moon rock, meteorite pieces and tektites, too. But only one piece to touch. (BTW, Mars rocks arrive here as meteorites, often found on the surface, black against white, in Antarctica). I've touched pieces of Mars and the Moon in museums in Washington DC but not here. There are meteorites at Stromlo that you can touch (if I remember correctly). There must be other remants around town. I've also got a few tektikes and a piece of the Henbury meteor in my rock collection. They are not so rare or expensive. Tektikes are a dime a dozen in rock shops. But it remains a special pleasure to touch any new bit of space. There's something special about touch: just watch how people surreptitiously touch items on display in galleries and museums. As for Geoscience Australia, its foyer display is a thing of wonder, of rocks and minerals and crystals and little known and free and open 9-5 M-F. Well worth a visit.

Touch a moon rock and explore much else geological in the foyer display of Geoscience Australia.
Posted by Eric Pozza at 10:45 am