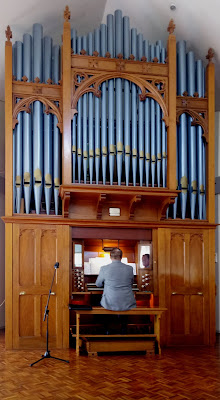 For an instrument so big and imposing and even clumsy, pipe organs are a strangely well travelled thing. I'm told Canberra has about 30 pipe organs (I guess those in church and of significant size; we may have more small, boxed chamber organs) and I've heard the history of several of them. They were proud possessions of churches that lost congregations and closed so they got passed on or sold, perhaps internationally, mainly from the UK. I just heard Trevor Bunning playing on the 1920 CW Leggo organ at the North Belconnen Uniting Church, Melba. That one was reconstructed and rededicated in 2008 after an earlier life at the Singleton Methodist Church. It has 610 pipes housed in the original cabinet complete with finials and in a church designed to house this very instrument. I'd seen but not heard this organ in the past until it appeared as a monthly concert of the Royal Society of Church Music, ACT Branch. Trevor Bunning was a leader in the restoration of this instrument, so is closely attached to it. He played a program of different cultures and different countries, from Bach and Buxtehude through Zipoli and Couperin and Stanley, renowned for his blindness and in English organ history, reaching the position of Master of the King's Band. Then more modern, with a Mendelssohn massive hit song from the earliest days of acetate recording and a Tuba tune and Amazing Grace complete with passing bagpipes. We did just see him passing by, but we heard him easily enough. So, an interesting contemplation on the pipe organ and a pleasing performance.

Trevor Bunning (organ) performed on the CW Leggo organ at North Belconnen Uniting Church.
Posted by Eric Pozza at 11:05 am