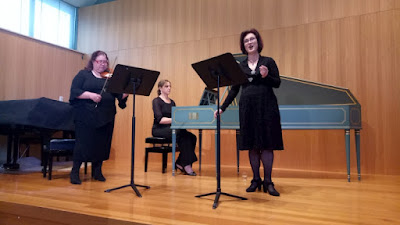 The clavicytherium was sitting on the edge of the stage and featured between tunes, but the real star of the day was Pierre Gillier Livres d'airs et de simplonies mélez de quelques fragmens d'opera. Sarahlouise, Lauren and Ariana gathered to perform this recently recovered collection of songs from the French baroque era (1697), This is a work of history by local academic Kathleen Gerrard who unearthed the manuscript in the vaults of the Versailles music library and has recently published the definitive text. Gillier was a student of Lully, and here produced a string of works of amusement to the aristocracy or perhaps the developing bourgeoisie, rich in stories of love and animals and references to classical mythology. It's all rather out of time for us,

but fascinating and pleasurable and laugh-inducing at times with the accompanying translated texts. The trio did it great justice, Sarahlouise emoting as only a singer does; Ariana hard at work throughout but gentle on the soft harpsichord; Lauren sitting out the songs but taking book-ending and intervening pieces with her baroque bow and easy gamboling cadence. And Ariana intervened at one stage to introduce this new Wesley instrument, the clavicytherium: an old and now rare instrument, recreated in this copy, luscious with its carvings on the subject of St George and playing somewhat like a harpsichord, strings plucked. It's missing some strings and even that replacement is a slow task, but maybe we can expect a Wesley outing sometime. A lovely historical but intellectually-informed concert.

Sarahlouise Owens (soprano), Lauren David (violin) and Ariana Odermatt (harpsichord) performed Gillier and Rameau at Wesley. The Gillier was recently un-earthed from Versaille and published in a definitive edition by Kathleen Gerrard.
Posted by Eric Pozza at 9:22 am