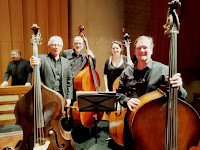 NCO played its concert at Llewellyn Hall and it was Lenny Weiss's last concert before he treks to Baltimore to study with Marin Alsop. He'll be missed, but it's a great and necessary step and CJ can only wish Lenny well. That was essentially the message from NCO, too, last night when he was farewelled. But he'll be back, even if only next year in the northern summer break to conduct a few concerts. This concert was one that Lenny had hoped for for some time. It was only finally agreed by the NCO Committee at this late stage because it was a big challenge, more-so given the time taken during recent rehearsals to test for new conductors. Berlioz Harold in Italy was massively twisty and varied. Lucy Carrigy-Ryan soloed the viola part and was a dream. The work is real challenge that the orchestra pulled off with surprising ease on the night, although that various sections took advantage of some shared responsibilities for some particularly tricky lines. It's common amongst basses, to share the quicker lines with the more lithe cellos. I noticed the brass was particularly effective some times when I was struggling. It's a communal effort and NCO carried it off with aplomb. Also a world premiere, Dante Clavijo Images of obsession 0236, that played with intervals of 2,3,6 semitones through various inversions and the like; sparse, slow, varying harmonies in an intellectual carapace. And Respighi Pines of Rome. As an ex-Roman myself (3 years in my 20s), I could only look forward to this one, eventually enjoying the various roles allocated to various parks I've visited, Gianicolo, Catacombs, Villa Borghese and the stomping military march of the Via Appia. Interesting imagery.