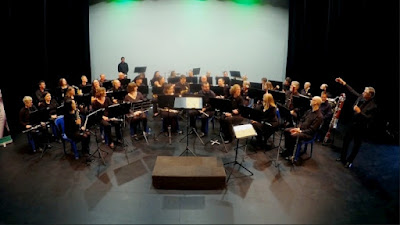 Canberra is ageing and it surprises me. It was only founded in 1913; Parliament only moved here in 1927; its development stalled due to depression and WW2 then restarted under Menzies in the '50s; it became self-governing in 1988 (although still poorly served with Commonwealth MPs). So I'm surprised that we had the 50th anniversary of Woden Valley Youth Choir just the other day, and my own Musica da Camera is aged 41 years and the Weston Winds are now 30. They had their 30th anniversary concert the other day and it was a blast. I like a concert band and here there was not a string in sight - just winds and some percussion - and the resulting sound is of its own and massively pleasurable. Deep, fat, consistent bass tones from bassoons and tubas; sharp soprano notes from the flutes; various raspy reedy tones from clarinets and saxes and the brassy declaratory clarity of the troms and trumpets. Just lovely. They played a large range of music. Just one JS Bach - his "Little" fugue in Gminor - and a string of modern tunes variously written for the orchestration or arranged for them. There were a string of film themes (Star Trek, Dr Who, How to train your dragon, Pirates of the Caribbean, Chicago) that had me wondering if the hoi-poloi only hears such music in films (it probably does). There was Percy Grainger with what we know as Danny Boy, and Eric Whitacre with his star Internet piece, Lux aurumque, and a few pensive themes, Hazo Southern hymn and one that touched deeply when you hear the story, of 5 kids lost in short time in one school, Swearingen Let the spirit soar. You could think of it as sentimental, but the melodicism was anything but in the context. Another fave for me was Sheldon Choreography, which musically presents the various dance movements in contemporary theatre and ballet. The group sounded a treat and was led clearly and capably by Peter up front. A huge pleasure. Congrats on the last 30, and looking forward to the next.