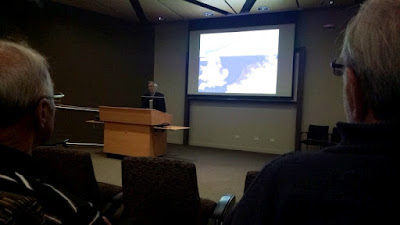 I'd known Andrew Glikson for some time but I hadn't realised he's an authority on asteroid collisions. I found this out when he was introduced. It's relevant to his current theme of climate change and tipping points given historical strikes and related climate change. Asteroid collisions are a branch of geology, so Andrew has that understanding of time that is non-human, so changes that we see in a lifetime are instantaneous. In fact changes over hundreds of years or thousands are still instantaneous to a geologist (given Earth's age of 4.5b years). It's relevant to climate, for the changes we are now seeing are instantaneous and, when compared to various events in our planet's past, the K-T boundary or PETM 1 or 2, the changes are not just fast but immense. He showed us estimates of rates of change of CO2 in the atmosphere: K-T +0.18ppm pa or PETM 1 +0.1 and PETM 2 +0.12. Now it's 1750-2018 was +0.48ppm pa (ave.) and still quickening: +2.69ppm CO2 pa (2018-29) (gasp!). I wrote something just a few years back and we had just reached 400ppm. We are now at 413.4ppm. It was then commonly estimated that we'd hit tipping points (non-linear, out of human control) at 450ppm (~+2degC). At +2.69ppm pa that's 14 years, ~2033. Mmm. That's with no change, essentially like LNP's Australia. So time to worry? Past it, I reckon. Andrew's a scientist so he's wary of claims and aware of the literature and evidence, and he still said things like: "so fast, now an abrupt event" and "rate of change ... [is] virtually instantaneous"; although there's still uncertainty of tipping points (there are many and they tip at different temperatures and temperatures vary over the globe) "[some] tipping points are already triggered". He also introduced topics like extreme weather as an amplifying feedback and weakened boundaries and migration of climate zones (eg, Jet Stream and the intense cold experienced in recent years in North America) and Stadial cold, where temporary cold spells (in geological time) follow quick temperature rises from CO2 levels. He provided charts showing sunspots matching global temperatures, at least until our Anthropocene, when they diverge, and another chart of used, known and possible (?) reserves of fossil fuels and the implications if they are burnt. It's not something to ponder and avoid despair, but suffice to say, there's enough to promote Venusian temperatures (+10s of degrees C). Apparently we are already committed to +10m sea level rise (from evidence of sea levels in the Eamian era at +1degC) and the emergence of the next ice age is delayed by 50K years with a possible 750ppm CO2 level before then. Andrew noted that the Holocene has been good for us, but we are the one species that has mastered fire and look what it's got us (not all bad, but all now threatened). Then some questions on civilisation, abrupt events and the Methane time bomb, possibilities of returning CO2 to the earth (big job, there!), individual and government responses. Hopefully, my understandings here are correct, but, regardless, the message was clear. And a final dedication to Greta Thunberg. I can only share that. Good luck to us all.