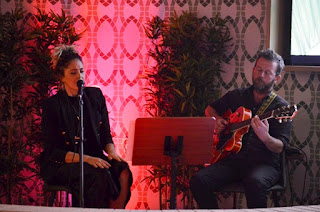 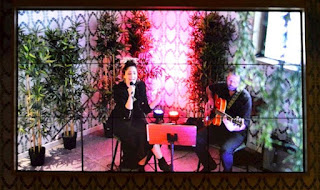 I forget often enough, but it comes back with an avalanche when I hear standards sung, especially when they are sung well. Standards are mostly songs of a era of great wit and informed songwriting and they speak truth although none too directly. They are clever and immensely satisfying. They can be that often enough with a bop take that explores their harmonic structure and perhaps, but not necessarily, their melodies. That is good and clever and can be satisfying, if in an intellectual way. Nothing wrong with that, but the intellectual whimsy and emotional depth of one of these songs sung is something else, even something more. I caught Sally Marett and Lachlan Coventry performing at Fenway Public House, a new venue for jazz on Tuesday nights, in the heart of Woden shops. It's a modern venue, with big screens and complex arrangements of drinking and eating areas. My beer was good. I could even watch Sally and Lachlan on a big screen, perhaps seeing the better that way than on a contrastily lit stage. These two are always committed and expert in their delivery, guitar and voice and solo guitar in between. Sally tells me that Hugh Barrett appears with her on alternate weeks. He's a deeply satisfying pianist, so another opportunity. The tunes were variously known and slightly lesser know, from Love for sale and Our love is here to stay, through Cheek to cheek and Just the two of us to Spring can really hang you up the most and Miss Celie's blues. All known to the ear but not necessarily first-called tunes. They were gloriously performed to experience their contrasting deep and playful purposes. I could only melt to this stuff. Hear words.