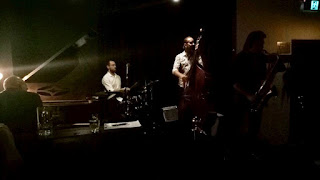 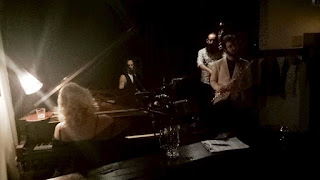 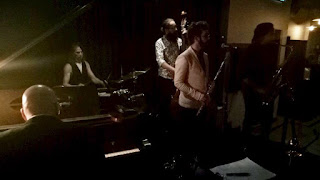 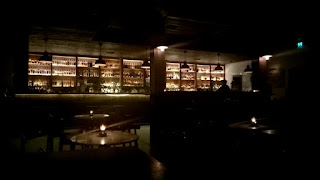 It was something of an act of en-couragement and succour to attend the Molly jam. I hadn't got there before and it's an impressive outing and a bit intimidating for a local player who might be expected to sit in. The room was packed and I didn't expect that. I had a few words to the band and got a beer and sat with decent separation, not being there to party and aware of virus guidelines. The band was fabulous, not unexpectedly. Like the previous night, driving from the top, clear in intent, aware and inventive, fabulous solos. Not sure I've quite felt this before, but host Con spoke through his tenor in wonderful expressive lines but also with a body and internal dynamics like speech. Wayne was a blowout as always; Mark was intelligent and snappy and always unpretentious; James spelt solos with such clarity and vibrancy that I was in awe, nicely constructed super-evident lines and quick chromatically moving frills and fills. Quite awe-inspiring. And with a great sound: fat and omnipresent in support and beautifully woody and clear when unaccompanied. There's a list for players who want to sit in; I was no.2. I got up with the band for Alone together and Caravan and then through various sit-ins, drums and flute and vocals and Lisa Keen taking over from Wayne on piano and sometimes vocals. James wiped/disinfected his bass before and after I played (sensible in these times but I've never seen that before!). Then a few final tunes by the core band to a shrinking audience to end. It can amaze me that we have such players here. They are not just in NYC or Berlin, but I've found that's the nature of jazz: it's truly international and great players are everywhere. Even if they go into remission for the occasional virus.