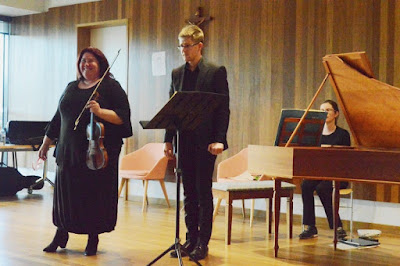 The return of live music is now judicious, especially with the second wave of CV19 in Melbourne and, as I write this, Bateman's Bay. That's Canberra playground territory, so we are all a little apprehensive. But this Limestone Consort concert was planned a month or more back and it went ahead. With sparse seating and limited numbers, as planned. And without the cello we expected, but that was due to a slip in the kitchen; not at all to do with the pandemic. So just Lauren on violin with James on harpsichord. Clara could just turn the pages (I don't envy Clara: finger skin injuries may be temporary but they stop your playing and they can be very painful). The program was Schmelzer for two numbers and Handel, Biber and Bach. Lauren noted that Schmelzer was appropriate for the program, given he died in a Plague. Certainly apt. Lauren always gives informative background introductions, social or musical. Another comment was on the Biber piece, Mystery (Rosary) sonata no.5 (Jesus in the temple). Apparently Biber was hugely inventive, even predating atonal composition. Here it was scoradatura, so the violin (a new and powerful-sounding baroque violin on loan from Hugh Withycombe) was tuned to an A major chord. Apparently the notation was for standard finger positions so the tones surprised the ear. Otherwise, there were two solo harpsichord pieces (Handel Voluntaries and fugues no. 3, 8 and Bach Toccata in Dminor (not that renowned Toccata and fugue - BWV913 not 565). In all, a lovely outing, small and sadly missing the cello, not least in the Schmelzer Cucu sonata, but a welcome return to live classical gigs.