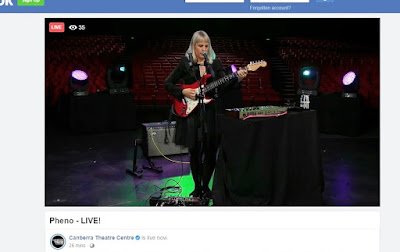 Streams are the core of our recent experience. I would find it hard to count the Webinars I've taken part in. A few invited guests speaking of whatever (one webinar included Nobel-prize winner, Stiglitz, no less). But the key, for me, is twofold: people from outside our local area, so a meeting could feature Stiglitz or the like, perhaps from their bedrooms, and the interactivity of the associated chat. That's important in a webinar. You take part in a parallel discussion that can be picked up in the core discussion or can give commentary on that core. So this is an active experience. I don't so much enjoy streamed gigs. Early on, I viewed a few Berlin Phil concerts, ACO, Smalls jazz. But it's passive. So it was good to get out and play that gig at Molly recently and feel the live experience again. We may be waiting a while for a full return to that! Given limited attendance numbers and lack of income for the arts for several months, I notice gigs are dearer, perhaps payment per set, as is the NYC way. But I did see a recent gig that I enjoyed.

Pheno. I'd missed Jess playing the previous week but caught her solo pop set as Pheno. Loops and guitar and harmonies and synths and repetition and pop simplicity. Her experience shows in the calm simple poppy lines and grooves. And in the song structures. And in the catchy melodies and her capable hands on guitar. The tunes are poppy and immensely attractive. The lyrics suggest depth and personality, but I'm yet to follow them too closely. And interestingly, this was somewhat interactive. She was playing alone on stage at the Canberra Theatre so the experience must have been telling for her, but she did respond to a few comments in her chat screen and got several hearts and cheers for the gig. Not much interaction but maybe all we can expect these days. Whatever, I enjoyed it lots. Check out Pheno on the streaming sites. She's on Spotify, perhaps elsewhere, but expect a search. Much enjoyed Jess!

Jess Green is Pheno. She performed a live streamed set from the stage of the Canberra Theatre.
Posted by Eric Pozza at 8:41 pm