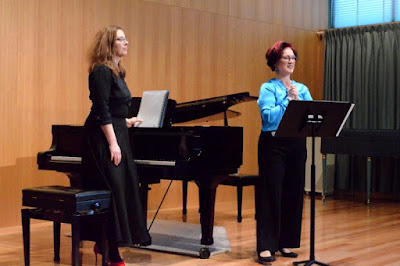 Art song is a style. I'd heard of it, but looked it up: mostly solo voice with piano, excluding arias and chamber music with song and the like. I think of mainly romantic styles and sopranos on stage, but no doubt other voices do it too. So I went to an ArtSound Canberra session, invited to record. Sarahlouise Owens sang soprano with Natalia Tkachenko accompanying on piano. Like much that I do these days, it had crossovers in style and more. Mike Dooley was page turning for Natalia. He was also the main composer for the session with a lengthy and intriguing collection called truth and bearty which put four poems of John Keats to music. They were renowned poems that kids of my days read as school and the source of many quotes: Endymion ("A thing of beauty is a joy forever"), To Autumn, Ode on a Grecian urn ("Beauty is truth, truth beauty - that is all / Ye know on Earth, and all ye need to know") and Ode to a nightingale. Mike did a great job, all rolling arpeggios and complex interpretations of iambic pentameters; even the sound of nightingales between stanzas. Then a strings of lesser known composers, often women: Linda Phillips with two Hebrew songs, Phyllis Batchelor with some love songs and more (love songs just have to be a staple of art song, as much other song to our days), Carl Vine and Horace Keats, two romantic males for this outing. It much have been a huge task to get this together, presumably for one concert. Sarahlouise was strong and firm, lively and entertaining. Natalia was more delicate, soft and responsive. So a lovely outing with my jazz mate Mike presenting yet another classical composition, this a song cycle and some wonderful performances. Just one last thing to note, not least on the subject of love. Mike's song cycle, his Keats poems put to music, were a commission by a man to his wife for their anniversary. More romance in song. We all liked that.
Sarahlouise Owens (soprano) sang artsong with accompaniment by Natalia Tkatchenko (piano) at Wesley. Mike Dooley composed the core song cycle to the words of Keats.
Posted by Eric Pozza at 9:25 pm