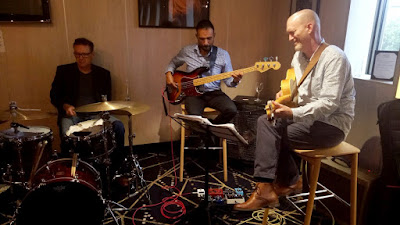 I was musing with a jazzer the other day about gigs around Canberra.  We have had a wave of losses over recent years from the changes to the ANU School of Music then the biggie from COVID but one modest venue has just kept on keeping on.  That's the National Press Club .  In fact, it's expanded, at least for jazz, as jazz has taken over from the thursday blues nights.  It's mild club jazz, but it can be exhilarating with some of the best players around town and occasional visiting mates.  So the other night I got to NPC for the Jason Varlet trio.  His offsiders were Greg Stott and Mark Sutton, both regulars at NPC.  I hadn't seen Jason for years.  He's a fluent, capable e-bassist and he was hot on the night, quick and fluently mobile over the neck with a boppy, chordal approach to solos and a soft tone.  Greg has his own speed, too, of course, but is more influenced by the melody (bassists tend to know chords and, despite best intentions, forget to learn the melody).  Greg is always a pleasure.  But tonight my eye was particularly on Mark, able and deliriously, pleasurably correct and so nice with some solos that were not so fast (well, sometimes in flourishes) as conversational, expressive, substantial.  One surprised me with mallets.  Otherwise, they were always fluent, working the various skins for expression, precise and consistent in attack and accent.  Not at all the rock star, but the eloquent and subtle virtuoso.  It was a particularly good night for Mark, I guess.  I could just chuckle  and give restrained applause.  Such a pleasure.  So, another visit to my local.  It's become a habit recently.