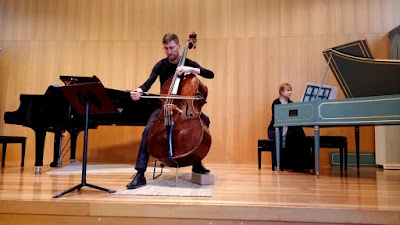 I'm a bassist and I was in awe.  Best seat in the house, perfect sightlines for bowing and the rest, just 6 feet away, for Axel Ruge, co-principal of the WDR Symphony Orchestra in Cologne and with a history of other Euro orchestras and teaching roles.  So this was a wonderful class in technique, but of course much more.  Firm fingers, ease in thumb positions, speedy lines and accurate intonation: that's all expected, but the glorious tone he enticed from his late-1700s bass had me in awe from the start, then the mastery of harmonics, playing extended arpeggios in harmonics over thumb positions had me floored.  Special strings, perhaps?  No?  From the windings, I think they were D'Addario.  German bow.   Four strings (must be his Aussie instrument).  But that tone, and that musical presence and that ease of lines and that purposefulness and commitment.  Of course, he's not playing in a section here, but as a soloist.  The first two tunes were genuinely solo, a set of variations on Greensleeves (!) and six studies from Giselher Klebe, more modern, somewhat Schoenbergian, 12-tonal.  Then a suite (or collection) of pieces for Gamba and continuo, played on harpsichord by accompanist, Hilda Visser-Scott.  An older work and a lovely old thing: my heart warms to this, even if my intellect may go to something more challenging.  Then Hilda moved to piano.  She was clearly doing a great job, reading, relating, responding, but all my limited bassist ears were on the bassist soloist.  Next were a Gliere prelude and a Bottesini Tarantella.  A showy outing, our Bottesini!  Apparently he was a conductor who dazzled at interval with his bass virtuosity.  I've heard Bottesini played before, but I don't think like this.   Playful and quick and scarily demanding.  I think the extended harmonic arpeggios were in this piece.  So I sat there admiring the firm fingers on ebony and the delicacy of little fingers on bow hold, applied then loosened.  Or his pizz, strangely jazz-like rather than the traditional classical, vertical, mid-string pizz.  He also plays in a klezmer band, so maybe that's an influence.  But mostly that tone was enough, it got to me; so, so lovely.  So this was a concert of awe for me as bassist and of deep pleasure for me as listener.

Eric, I agree, an amazing engaging concert. So wonderful. I loved the solos but also the accompanied pieces were beautifully complimentary..
Wesley Music Centre, first lunchtime concert for the year - that a triumph and an indication of the quality of concerts to come. See you there next Wednesday!