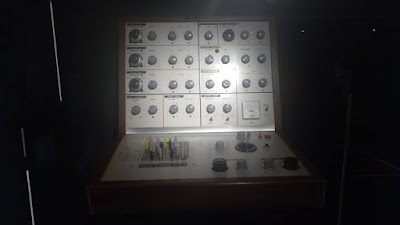 Film is not my favourite art form. Nonetheless, I went to one, Nomadland. It seemed fairly obvious if touching. We’ve read of such inequality and desperation in the US before (Nickel and dimed : undercover in low-wage America / Barbara Ehrenreich). We’ve hoped it wouldn’t happen here but of course it is in train right now. I just wondered what it says about modern film art that a fairly known theme would get such plaudits. Maybe with Covid, it’s time. Just my musings. But more relevant to this site, we also visited the ACMI, the Australian Centre for the Moving Image, a museum of “screen culture”. Mostly it was about techniques and technical developments: how the first moving pictures were made, some snippets, how movies are now made, film and TV and games, technical roles (costumes and storyboarding and props and special effects and more). Some thing on the role of moving images in politics (interesting) including a spot on SS4C (School Strike for Climate; next demo due 21 May). Something else on private film matters, as film/video became cheaper and home movies became common. Not the most interesting museum for me but for some or many, their favourite artform.  BTW, the pic is Don Bank's early synth used for film work, perhaps Dr Who?

The Australian Centre for the Moving Image (ACMI) is in Fed Square, Melbourne.