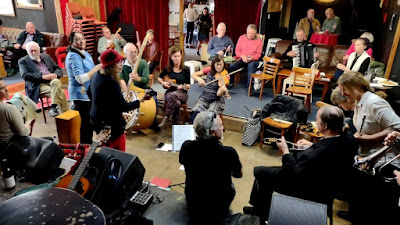 I think of Afrobeat as electric, hot rhythm section, horns out front, deeply funky.  That's  what I had expected at the Afrobeat jam session at Smiths.  They happen on Sunday afternoons and have been running for several months.  This was my first visit.  Not at all bad, but not what I'd expected.  This may be, probably is, more authentic to traditional village music making in Africa.  I dunno.  It was folky, acoustic, still rhythmic, still with that tum ta-tum rhythm on the 2+, more soft and with some intriguing instruments.  One guitar-like instrument had 12 tuners and the smallest of bodies (so cute!); the bass was a double bass neck on a kick drum body.  And some more traditional instruments: lots of percussion to share around; flutes and guitars, fiddles and flugels; voice.  I enjoyed tapping a resonant box in the background, but I may have been too varied so undermining the intense, unending regularity.  It has its own mega-power that infuses and inculcates and brings out the dancing feet in the audience.  If they are not joining in somehow else.  So folky rather than funky but still strongly grooving and very inclusive.  A nice and friendly scene for a cold Sunday arvo.