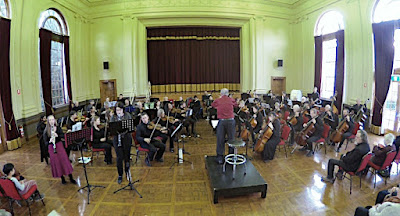 It's the fourth Beethoven symphony that I've played, thus B four.  Sadly, I was not particularly well prepared.  Endless conflicts have come up over the last two months and I've missed a mass of Maruki practices.  Even on the day, I had an invitation to a friend's birthday party that conflicted with the warmup and performance.  I dropped gear off, then got to the party then returned for the show.  No warmup.  This on a significant program: Beethoven Symphony no.7, Krommer Concerto for two clarinets and Mussorgsky Pictures at an exhibition.  B7 and Pictures are well known.  The Krommer was new to me, although apparently he's well known to clarinetists.  That was a Mozart-ish early classical concerto in three movements.  Maruki are no slouches.  We got through it all, not fabulously resonantly, but we did it and experienced the pieces and learnt so much of them.  I enjoy this experience and this exposure to the repertoire.  For we work through a very serious repertoire, just as the pros.  Just perhaps not quite so well intoned.  Then to finish off, a dinner party at home.  It was a busy weekend, but why let up?  Congrats to our crew for a massive performance.