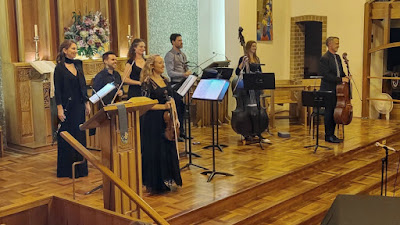 This was Beethoven 6 Pastoral Symphony in chamber format.  Australian Haydn Ensemble look for the interesting outings and they found one here, of particular interest given how know is this piece.  I think Skye mentioned it hadn't been played for yonks and they'd discovered it in some London archives.  That's how to make an investigative period ensemble.  Good on them and quite fascinating.  This  arrangement of B6 was by Williams Watts who had introduced much of Beethoven to Britain; he'd arranged all the symphonies for 2xviolin, 2xviola, flute, cello, bass and that was the format this evening.  All fascinating history and a new and fascinating take on the symphony, if lacking the power of 50+ players.  But they did it so well and we could follow the much reduced score in our heads.  And there were some demanding lines.  AHE featured a new bassist this evening, Bonita Williams, and I could only sit and admire some very fleet playing where, in the 3rd movement, I think.  And a strong bass presence.  Some cello floored me, too, as did some delicate lines from Matt at one stage, and generally from Skye and Melissa and viola Karina, too of course.  I just tend to the bottom end.  But the concert was a big event.  Before interval were a Boccherini string sextet and a Mozart Serenade.   Very different works, although again the Mozart, Haffner Serenade, originally arranged Masi with further work by Scolari & Lim) was a chamber arrangement with some selections.  Suffice to say this was a big program with intellectual clout and some great playing.  Always love a visit to my mate in the AHE.