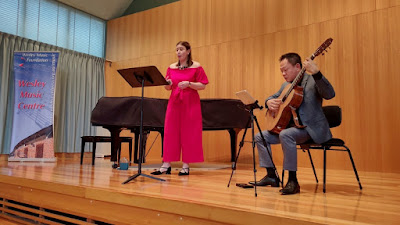 This was like a cultural tour, through time and Euro space.  AJ America was singing with Minh Le Hoang on guitar as accompaniment.  First up were 3 songs by John Dowland, Tudor England (~1600).  The originals were played on lute, but the guitar fitted.  Minh may be of a totally different background, but his Euro guitar was superb.  Just shows how all is all these days.  Then Castelnuovo Tedesco writing Spanish in 1956 and Manual de Falla with 3 more popular songs from 1914.  Amusingly, the Moorish cloth was a metaphor for the straying lover who is eventually ripped up when tired of.  Then a bit of classic Euro artsong: Schubert Die Nacht.  Then French song from 1890, Reynaldo Hahn L'heure esquise.  So we have England, Spain, France (with a Vietnamese accompanist) ranging from  Tudor to contemporary. Quite a mix and very successful.  AJ has a strong mezzo voice and could indulge at times.  Minh accompanied with the most delicate playing.  A real treat all round and not a minor lesson to boot.  Just another Wednesday at Wesley?