Music for the people 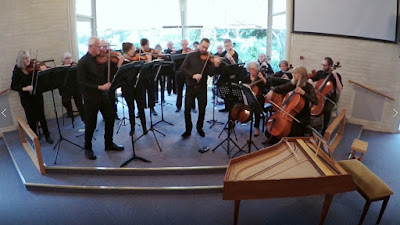 Music for the people was the theme of the concert but I'm not sure I felt quite so secure leading up to it.  Not for the Vivaldi Autumn, which is obvious and pretty and well known, even if it is demanding in its own way.  Not for the few Scandinavian folk tunes that our leader for the event, Dan Russell of the Phoenix Collective, had discovered in recordings of the Danish String Quartet.  They were pretty and challenging in their own ways.  Initially it was for the Shostakovich.  Mention his name and it brings instant respect from fellow players ("You're playing Shosta?").  It was his Chamber Symphony and it was deliriously quick in the second movement and everyone was wary of that.  We didn't play it at full speed, but in the end we got away with it.  Fear is a great motivator for practice!  But strangely the Saint-Saens Introduction and Rondo Capriccioso was a sleeper challenge.  It looked simple enough but the bending of time was a big issue and we ended up with Gill conducting.  That helped.  Even so, I still misplaced the final note, but hopefully it was missed.  Maybe not: Dan had good ears.  He was an impressive player, too: nimble, playful, quick and nicely emotive in note formation.  But in the end, it worked.  This group is a capable one, and as Graham McDonald said in his concert review in City News, we are " “amateur” as someone who pursues an activity for pleasure ... while non-professional, produc[-ing] entirely credible performances of interesting music".  Wow, that's one to be proud of.  Thanks to Dan and a great pleasure to be blooded by Shosta.