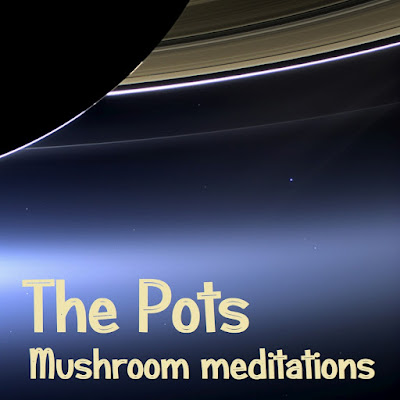 The Pots has released its sixth album.  This is a magic number.  I can now claim twice as many albums as monthly listeners on Spotify.  That's the way it is, I guess.  (It wasn't always this way: I once got to 39 with a little more marketing)  This one is called Mushroom meditations.  Megan suggested I record a meditation album, fully instrumental, presumably given my voice and political indignancy.  I liked the idea but just added some intellectual content as selections from my personal quotes.  Most quotes are widely known and renowned; some are taken from novels or other and perhaps not in all the quotes databases, but nonetheless, they are public.  Just one was a quote from the Spike Wilner from a SmallsLive newsletter in 2016.  For that one, I sought his permission, given it was not too, too public or known.  The longest quote is Carl Sagan on the famed Pale blue dot (1990), the photo of the Earth taken from the Voyager spacecraft.  I use a more recent but related pic from the Cassini spacecraft (2019) on the cover.  It's called The day the Earth smiled.  Thanks, NASA.   Otherwise, the content is minimalist, or as minimal as my excitability allows.  I like musical repetition but I can't come at the endless single chord as musical expression so there are various embellishments.  Anyway, have a listen.  It's on Bandcamp now and will come to Spotify, YouTube and the other streaming sites as approved and distributed over the next week or so.