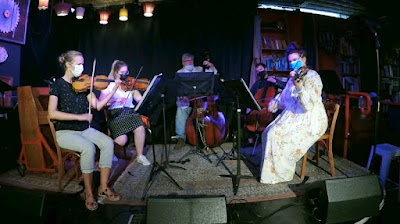 I had a mate playing at Classical Capers at Smiths so I went along to have a listen.  The group was a string quintet called Scribbly Strings.  They started up this night's Capers with two movements of Mozart.  Now that's always nice.  Then onwards through this strange and inclusive classical jam session.  Now this is a strange concept.  Mostly it was people getting up to present their latest for a audience but there were several real jams.  The Strings were presented with charts and supported a singalong led by Tobias Cole.  Charts were handed out liberally for everyone to join in.  Then later, Tobias sign read melody with Viola da gamba accompaniment.  Then a true improv for all present, starting with 10 secs to take in the ambience and a few minutes for whatever came.  There were some interesting lines from a few very capable voices but I found the percussion not too connected to the rest, but this is experimental and brave so good.  There were some soloists, a capable Leo playing piano featuring especially Gradus ad Parnassum.  Apparently the original was a hugely influential study on counterpoint.  This felt like a very advanced study and that fits.  Zacchary played Prelude and Allemande from Bach Cello suite no.3 and that was very capable.  John presented a few historical instruments and played the viola da gamba.  I didn't get them all, but there were various other recorder and vocal and violin pieces from various others.  In all, a varied mix with a welcoming host and a friendly, inviting audience.  And it's a monthly affair, third Wednesdays.

Scribbly Strings performed at Smiths' Classical Capers along with many others.  Tobias Cole MC-ed.